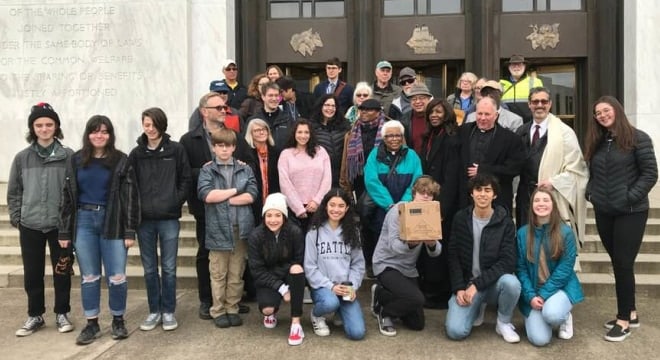 Clergy and students dropped off 3,400 sponsor signatures with the Oregon Secretary of State on Monday in order to draft a ballot initiative to ban “assault weapons.” (Photo: Rabbi Michael Cahana/Facebook)

A group seeking to place a ban on many popular semi-automatic guns and their magazines in front of voters turned in their initial signatures this week.

The backers of Initiative 43 have reportedly submitted to state officials their first batch of signatures needed to begin the drafting process. Some 1,000 valid signatures are needed to sponsor the ballot measure, and the group, organized by religious leaders, handed in 3,400, The Statesman Journal reported.

The guidelines for an assault weapon under the budding referendum would be any semi-auto capable of accepting a detachable magazine and has any one of enumerated cosmetic features such as an adjustable stock or threaded barrel. Likewise, magazines capable of holding more than 10 rounds would be subject to regulation. If approved by voters, it would require owners of targeted guns and accessories to destroy them, hand them over to police, move them out of Oregon, or register them with state officials. Possession of a regulated device without proper registration would be a Class B felony, a crime that brings with it up to 10 years in prison and a $250,000 fine under Oregon law.

The move is the second attempt in as many weeks by a trio of Portland-area religious leaders — Episcopal minister Alcena Boozer, Rabbi Michael Cahana, and Lutheran pastor Walter Knutson — seeking to tap into grassroots student gun control movements popping up in the state following the Parkland school shooting in Florida. The group filed Initiative 42, a similar drive, on March 19 but withdrew it a few days later.

Second Amendment groups warn the renewed ballot referendum is bad news for the average gun owner in the state, with the Oregon Firearms Federation saying in an alert it will “ban modern firearms and magazines and make felons out of thousands of law-abiding Oregonians.”

Should the move have enough signatures validated by the Oregon Secretary of State’s office, it will be up to the state attorney general to draft and certify a ballot title, a process that can take a month or more. Once that occurs, the group will have to garner another 88,184 signatures by July 6 to move the initiative to voters.