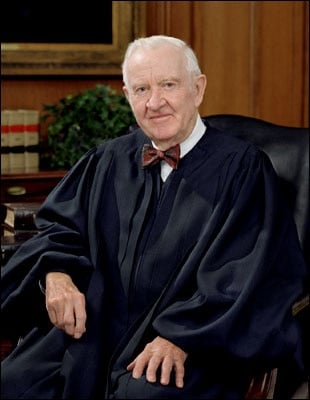 Retired Supreme Court justice John Paul Stevens said the youth movement launched in the wake of the Florida high school shooting should demand not just gun policy reform but also “a repeal of the Second Amendment.”

In a New York Times op-ed, Stevens, who was nominated by former Republican President Gerald Ford and served on the high court from 1975 to 2010, called the Second Amendment “a relic of the 18th century.”

Stevens explained the founding fathers included the amendment out of “concern that a national standing army might pose a threat to the security of the separate states,” but the concern no longer exists since the threat no longer exists.

He argued the National Rifle Association weaponized the Second Amendment to stymie federal gun regulation, which led to the modern interpretation to mean “an individual right to bear arms” set by the high court in the 2008 decision DC v Heller. Stevens was one of the four justices to cast a dissenting vote.

“Overturning that decision via a constitutional amendment to get rid of the Second Amendment would be simple and would do more to weaken the NRA’s ability to stymie legislative debate and block constructive gun control legislation than any other available option,” Stevens wrote.

Stevens op-ed follows a weekend of student-led demonstrations, dubbed the “March for Our Lives,” across the country in which thousands gathered in support of gun control policies.

In 2014, Stevens wrote the book “Six Amendments: How and Why We Should Change the Constitution” about revising the Constitution to address contemporary issues, including gun violence.

Perhaps it goes without saying, but a measure to repeal the Second Amendment is a nonstarter for gun rights advocates.