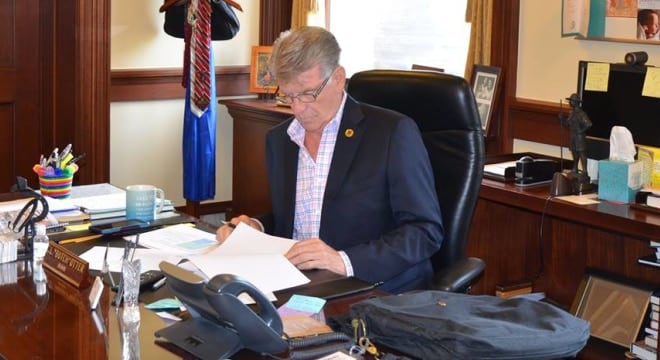 Idaho’s Republican Gov. Butch Otter has been processing through a stack of legislation on his desk from this session, but took no action on a measure to enshrine SYG protections, instead allowing it to become law without his signature. (Photo: Governor’s office)

The proposal, SB 1313, was popular in the Republican-controlled legislature, passing the House 57-12 and the Senate 29-6 earlier this month before it reached Otter’s desk. The GOP governor did not act on the measure and it became law without Otter’s signature on March 22. Backers argue the bill only clarifies someone’s rights in Idaho to stand their ground in a self-defense encounter and it is backed up by existing case law in the state.

“Idaho has some of the best self-defense laws in the country,” state Sen. Todd Lakey, R-Nampa, told lawmakers during the bill’s trip through the Senate. “These concepts have long been recognized and described in Idaho code, case law and jury instructions.”

The law adds to Idaho’s statutes so-called “Stand Your Ground” principles that clarify a place of business and an occupied vehicle as included in the state’s list of defensible places where there is no duty to retreat. In short, as long as a person has a right to be in a place, they can stand their ground and defend themselves or another person with reasonable force.

“This bill leaves out crucial parts of our current longstanding self-defense standard that give Idahoans the ability to protect themselves while recognizing that it is always better to avoid taking a life if possible,” said Elana Story with the state’s Moms Demand Action chapter, saying it was “disheartening” that Otter chose not to scuttle the veto-proof bill.

The National Rifle Association, who backed the measure, said it will improve a citizen’s self-defense protections in the state.

“Until we can predict where and when a violent crime will occur we must rely upon our fundamental, individual rights as Americans to defend ourselves and our loved ones,” said NRA state liaison Keely Hopkins. “This law recognizes that right and places the burden of proof upon the criminal instead of the victim.”

Similarly, in nearby Wyoming, Republican Gov. Matt Mead decided not to veto a pending Stand Your Ground bill earlier this month, but rather to allow the measure to become law without his signature.