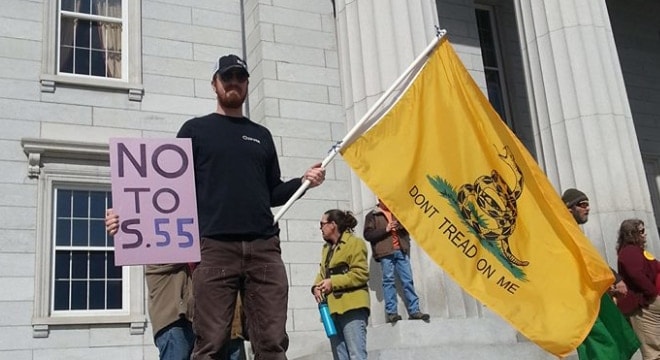 The proposal ready to be signed by Gov. Scott is opposed by gun rights advocates while Vermont Attorney General TJ Donovan and others in law enforcement have worries about its enforceability (Photo: Gun Owners of Vermont)

A bill mandating magazine capacity restrictions, installing a ban on bump stocks and raising the age to buy guns in Vermont is headed to Gov. Phil Scott.

The measure, S.55, has been controversial and needed 16 of 30 state Senators to approve changes made by the House last week. In the end, the gun control proposal picked up 17 “yes” votes, though lost one of its prior supporters along the way.

“When I have looked at a firearms restriction I have been guided by one principle; will the proposed legislation keep firearms out of the hands of individuals who should not possess them,” said state Sen. Dick Sears, D-Bennington, who sponsored the bill but later distanced himself from it. “However when law enforcement officers, our attorney general and our states attorneys tell us that something is unenforceable we should listen.”

The bill would cap handgun magazines to 15 rounds and rifles to 10 rounds, with an allowance for gun makers inside Vermont to continue to manufacture such devices for sale outside the state. Law enforcement groups pointed out to legislators they didn’t think such a regulation can be enforced as unknown numbers of magazines capable of holding more cartridges than the limit are already in circulation and would be grandfathered in should Scott sign the bill in to law. To underscore this fact, gun rights advocates handed out 1,200 free Magpul magazines at the state Capitol on Saturday. Vermont Attorney General TJ Donovan said the ban would likely just end outright retail sales of restricted magazines in the state if adopted.

Other less controversial tenets of the bill include a ban on bump stocks and raising the minimum age to buy shotguns and rifles to 21 to match the state’s current handgun limits, though either could land the state in court as seen with a similar measure adopted in Florida last month.

Gun industry trade groups argue the package isn’t needed. “The Vermont legislature, at the urging of Gov. Phil Scott, rammed through legislation while shutting out the voice of Vermont gun owners,” Lawrence G. Keane, senior vice president of the National Shooting Sports Foundation, told Guns.com. “Vermont is among the safest of states and this legislation won’t advance public safety. Instead, it strips Vermonters of their inherent right to self-protection.”

As for Scott, he said he is ready to sign the bill into law as well as two others that are still pending in the legislature.

“As I’ve said, I strongly support the Second Amendment and all Constitutional rights,” said Scott, a Republican. “I support S.55, S.221, and H.422 because I believe these bills uphold these rights while taking reasonable steps to reduce the risk of violence.”