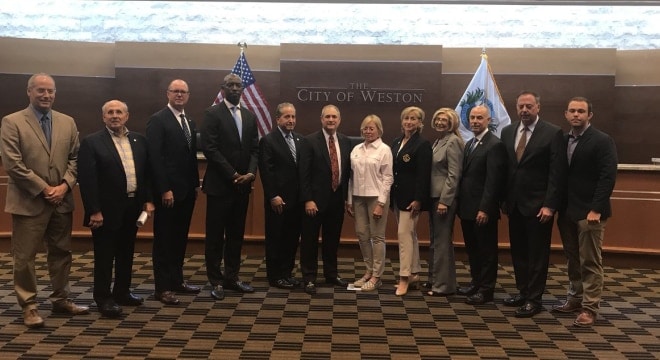 A group of south Florida cities seeking to enact their own local laws on guns and ammunition is taking the state to court for the ability to do so.

The lawsuit, headed by Weston’s city attorney Jamie Cole, was filed Monday against Florida Gov. Rick Scott, Attorney General Pam Bondi, and other state officials in Leon County circuit court. In the action, the plaintiffs argue that a 2011 Florida law unconstitutionally prohibits local governments from enacting their own gun restrictions and are seeking to defang the longstanding measure.

“It is the job of local government to make sure residents are safe,” said Miami Beach Mayor Dan Gelber Gelber, a Democrat, at a press event in Weston announcing the lawsuit. “At my own City Hall, someone can walk in with a concealed weapon and there is legally nothing I can do about it. Nothing.”

The Miami Herald reports that many of the plaintiffs signed on to the lawsuit want tough local gun laws including a ban on “assault weapons” in Coral Gables and gun-free zones in city-owned venues and public buildings.

Second Amendment advocates who fought hard for the preemption law argue the city leaders are reaching too far. “When they willfully and knowingly violate state law they have to be held accountable,” Marion Hammer, a past NRA president and executive director of the group’s Florida affiliate, told The News Service of Florida.