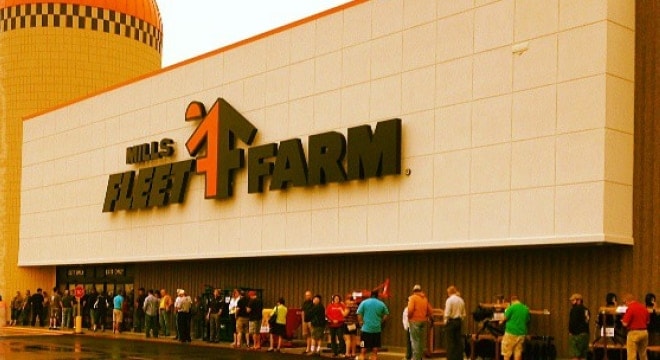 Fleet Farm’s chief executive this week said the retailer is not advertising AR-15s and similar rifles, though they are still for sale, and will not transfer guns without a completed background check. (Photo: Fleet Farm)

Citing feedback from customers, Mills Fleet Farm has reportedly made a series of changes to the gun policies in their outlets across the Midwest.

Fleet Farm has 37 locations in Iowa, Minnesota, North Dakota, Wisconsin, and last month the retailer quietly stopped advertising some semi-automatic rifles and their accessories, but company officials said they will still sell them.

“In response to customer input, we made the ad decision a month ago,” Derick Prelle, Fleet Farm’s chief executive, told The Star Tribune. The move follows similar actions from retailers such as Dick’s in the wake of a school shooting in Parkland, Florida that left 17 dead in February.

As of Tuesday, the only semi-auto long arms listed on Fleet Farm’s website were rimfire rifles and shotguns — none with a detachable magazine with a capacity larger than 10 rounds. The selection is mirrored in their weekly ad and new Spring Sports Catalog.

In addition to moving AR-15s and other semi-autos to the secret menu, Fleet Farm has instituted a policy not to transfer firearms until the store confirms a background check with authorities. Under federal guidelines, licensed firearms dealers can transfer a gun immediately after issuing a “proceed” authorization through the FBI’s National Instant Criminal Background Check System. In cases where the FBI gives a “delay,” it is up to the dealer whether to go through with the transfer after three business days.

Often referred to by gun control advocates as the “Charleston Loophole” after it emerged the killer in the 2015 Emanuel AME Church shooting in Charleston, South Carolina, obtained his firearm after procedural errors in his background check failed to deny his purchase and he subsequently obtained his gun following a three-day delay, other retailers have made similar policy changes in recent years.

Trade representatives from the gun industry and Second Amendment groups have argued only a tiny portion of total background check delays result in actions for firearm retrievals by law enforcement and that removing the current default would give the FBI power to deny firearms transfers without having to substantiate them, in effect installing a valve that could be used to close the pipeline to legal gun sales if so desired. They hold it would be more productive to fix issues with the NICS database instead.

Fleet Farm was founded in 1955 and since 2016 the retailer, headquartered in Brainerd, Minnesota, has been a subsidiary of KKR, a publicly-traded investment firm.