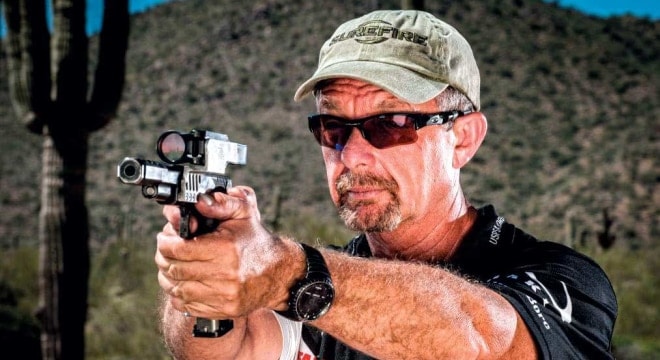 Voigt, who won his first IPSC Handgun World Shoot medal in 1993, worked in research and development for SureFire and Safariland before becoming president of the United States Practical Shooting Association in 2000, an office he held for 12 years. He succumbed to what was described as a lengthy battle with cancer on March 24 in Corona, California.

Voigt was seen as setting the bar for many in 3-gun competition.

“It was in 3-Gun where some of Voigt’s innovative gear choices, such as secondary optics, became groundbreaking, while his shooting performances proved legendary,” observed 3-Gun Nation. “Voigt’s frequent battles with Jerry Miculek in the Open/Unlimited divisions at 3-Gun matches have given competition shooting some of the greatest displays of action shooting, regardless of discipline.”

Voigt was a sponsored shooter for Team Hornady and Team Safariland, among others. In addition, he was also a devoted trainer, serving as a coach for the History Channel show Top Shot, as well as instructing military and law enforcement around the globe.

His wife of 11 years and fellow competition shooter Maggie Reese-Voigt said on social media that services and interment will be held Saturday, April 14 at 3 pm at Rose Hills Memorial Park, 3888 Workman Mill Road, Whittier, CA 90601. “All are welcome to attend.” She has asked that in lieu of flowers, donations be made to support the USPSA Junior Program.

Voigt in 2011, talking about both competition and R&D: