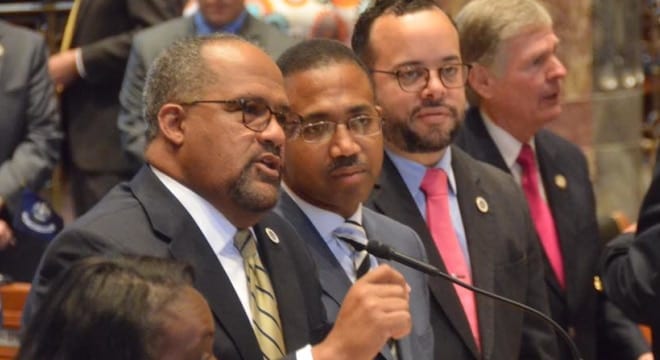 Sponsored by state Sen. Troy Carter, seen at the mic, SB 274 would put a broad class of guns off-limits to a segment of adults under age 21. (Photo: Sen. Carter, Facebook)

A measure advanced out of committee this week would put many popular semi-auto firearms out of the reach of those 18-to-20 in Louisiana.

The bill, SB 274, was approved by the Senate Judiciary Committee on Tuesday and heads to the chamber’s floor for a vote as early as this week. Sponsored by state Sen. Troy Carter, it would put many guns off-limits to a segment of adults in the state based on age. Carter said he is a gun enthusiast and that his bill doesn’t take away anyone’s gun rights. What it does, he contends, is take away “assault rifles” from those under age 21.

It should be noted that these types of firearms are rarely used in crime in the state — of Louisiana’s 543 homicides in 2016, just 26 involved rifles of all sorts and seven were tied to shotguns, according to FBI statistics. Handguns, used in most of the homicides in the state, are already off-limits to those under 21 by federal law, but that hasn’t stopped teenaged criminals from acquiring them. One of the most prolific murderers in recent state history was Gregory Stewart, a New Orleans drug dealer who pleaded guilty to a host of federal charges in 2014. Stewart confessed to more than a dozen murders starting at age 18, and among his favorite guns was an illegally acquired Glock .40-caliber pistol he dubbed “Barack.”

At the same time, Louisiana conservation authorities sold more than 300 “student” hunting licenses in 2017 to non-resident high school and college students alone, a group, along with resident hunters in the same class, likely to be impacted by Carter’s bill.

“This legislation is demeaning to Louisiana’s young adults who are otherwise allowed to vote, join the military, and exercise every other constitutionally guaranteed right,” said the National Rifle Association in an alert opposing the measure.

Further, gun dealers could be under criminal liability under the proposal, as selling a restricted gun to an adult under age 21 could be fined up to $1,000 and result in a year in jail.