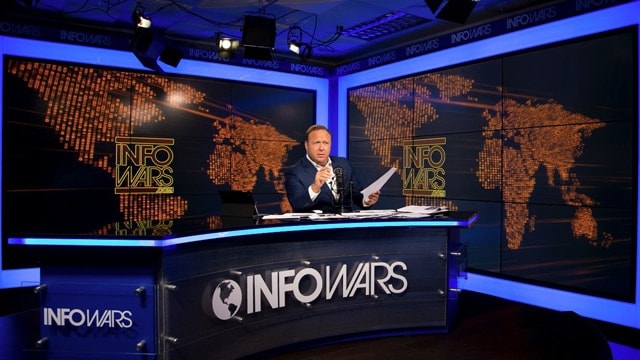 Infowars and its leader, Alex Jones, are at the center of a defamation lawsuit for misidentifying the Parkland shooter. (Photo: Infowars/Facebook)

A Massachusetts man sued Infowars in a Texas court this week for defamation after the popular conspiracy theory website misidentified him as the Parkland shooter in a story published in February.

Marcel Fontaine alleges the site and its leader, Alex Jones, circulated his photo simply because of the red shirt he was wearing, which read “the Communist Party” and featured Karl Marx sporting a lampshade as a hat and Joseph Stalin, Vladimir Lenin, Mao Zedong and Fidel Castro drinking from red solo cups.

Mark D. Bankston, Fontaine’s attorney, told the New York Times on Tuesday the shirt was clearly a joke and accused Infowars of “intentionally disregarding fundamental newsroom ethics due to its desire to politicize the tragedy.”

Fontaine said in court documents he still receives threats and harassment daily. He seeks more than $1 million in damages.

It’s not the first time Infowars retracted one of its salacious stories. In March 2017, Jones apologized for spreading a fake story about a satanic child pornography ring disguised as the Comet Ping Pong pizza shop in Washington, D.C. The story — dubbed Pizzagate — attracted the interest of a 28-year-old North Carolina man who fired his rifle inside the restaurant during a December 2016 visit. The man later told the New York Times he heard of the hoax while listening to Jones’s popular radio show.

“Alex Jones is no longer a gimmick or a sideshow,” Bankston told the newspaper. “His audience rivals that of major cable networks, yet he refuses to exercise the most basic journalist integrity. What happened to Mr. Fontaine is the predictable result of the reckless practices Mr. Jones has fostered at Infowars.”