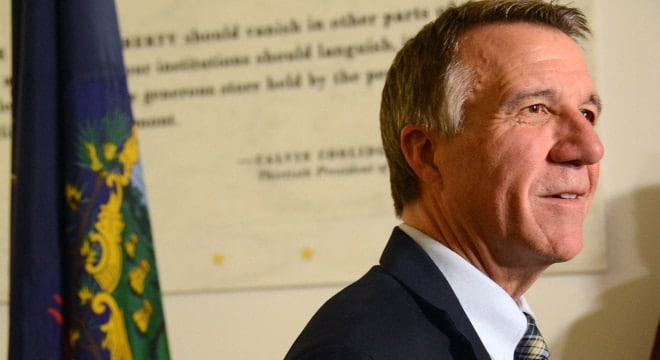 Lawmakers in the Green Mountain State passed a pair of gun confiscation measures Thursday, sending them to a Republican governor who is prepared to approve them.

The two bills, S.221 and H.422, would remove guns from those thought to be “at risk” and from those arrested or cited on domestic assault charges. Both proposals passed unanimously in the legislature this week and join a third, S.55, already on Gov. Phil Scott’s desk.

“As I’ve said, I strongly support the second amendment and all Constitutional rights,” said Scott in a statement about the legislation. “I support S.55, S.221, and H.422 because I believe these bills uphold these rights while taking reasonable steps to reduce the risk of violence.”

S.55, which would restrict magazine capacity to 15 rounds on handguns and 10 rounds on rifles, ban bump stocks and raise the age to buy guns in the Vermont to 21, slid past the state Senate last week by one vote and triggered a magazine giveaway from gun rights groups who rallied to oppose the measure.

S.221 would add a mechanism to Vermont law to allow for so-called “extreme risk protection orders” which would allow family members or authorities of a person thought to be a threat to themselves or others to petition the court for an order to seize any guns possessed by the individual pending a hearing. Similar measures have been adopted in California, Washington and Florida and have been characterized as “red flag” laws by supporters and “turn in your neighbor” bills by some civil liberty and gun rights groups, pointing to due process concerns.

H.422 speeds up removals of firearms from those charged or cited in the state over some domestic violence or abuse accusations. It would allow officers responding to a report to seize guns in plain sight or discovered during a lawful search. A judge could order the guns returned pending the outcome of a trial unless they are being held for evidence or the defendant is barred by the court from possessing a firearm.

With the pressure on in the Statehouse to pass gun restrictions, Vermonters have been reaching for their wallets to stock up on firearms, ammunition, and accessories in recent weeks. March proved to be the busiest month ever for background checks on gun transfers in the state.