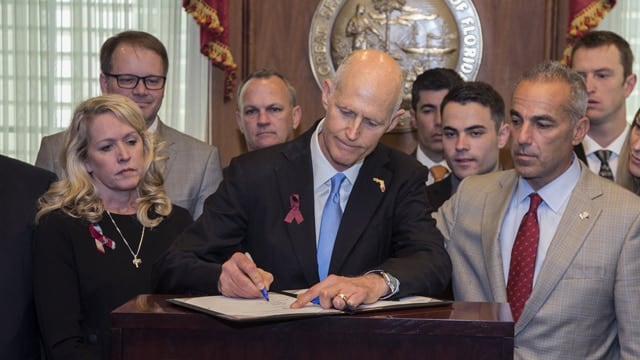 The uptick in applications processed through the National Instant Criminal Background Check System in March comes as state legislators stamped a package of sweeping reforms in the wake of the Parkland shooting.

Florida dealers processed just under 138,000 NICS checks last month, according to FBI data, including applications for more than 64,000 handguns and nearly 31,000 long guns — increasing 12 percent and 15 percent, respectively, in a single month.

The biggest month-over-month spike, however, came in the NICS’s “other” category, which includes accessories defined as “firearms” under federal law. Dealers submitted more than 6,700 applications for this category in March, a 46 percent increase in a single month and nearly double the total recorded a year ago.

Estimated gun sales in Florida — the sum total of the handgun, long gun, other and multiple categories in NICS — exceeded 104,000 in March, a 15 percent increase over 2017.

There’s a well-documented correlation between high-profile mass shootings and increased gun sales — most notably a 61 percent nationwide spike witnessed in the days after the Sandy Hook massacre in December 2012.  The second half of the month accounted for eight of the biggest days for background checks that year. Four of them made the FBI’s top 10 busiest days ever list and the week after the shooting still ranks as the single busiest week in NICS history.

The week of Feb. 26 through March 4 ranks the eighth busiest week in NICS history with 695,503 applications processed. It’s the same week a wave of corporations — including Dick’s Sporting Goods, Walmart, Kroger and L.L. Bean — announced changes to their firearm policies in the wake of the Parkland shooting.

The bump in estimated sales after the Valentine’s Day shooting in Parkland, Florida, however, took longer to materialize in federal data. Background checks exceed 2.7 million last month, marking the busiest March ever recorded in FBI history.

It’s likewise the busiest March ever recorded for the Sunshine State as Gov. Rick Scott signed into law a mammoth package of restrictions hardening Florida’s school and overhauling its gun laws, less than a month after a teenaged gunman murdered 17 at his former high school in Parkland.

“We can never replace the 17 lives that were lost at Marjory Stoneman Douglas High School, and we can never erase the traumatic experience that lives on in the memories of those who survived this horrific attack,” said Senate President Joe Negron, a Republican from Stuart, about 70 miles north of  Parkland. “However, we will do everything we can to address the failure of government to effectively address the numerous warning signs that should have identified the perpetrator as a danger to others.”

Florida Republican Gov. Rick Scott signed the regulations into law March 9, despite objections from gun rights groups and even some Democrats, who expressed concerned over the provision arming staff.

“I am going to do what I think are common-sense solutions,” Scott said, per the Washington Post, after the signing. “I think this is the beginning. There is now going to be a real conversation about how we make our schools safe.”