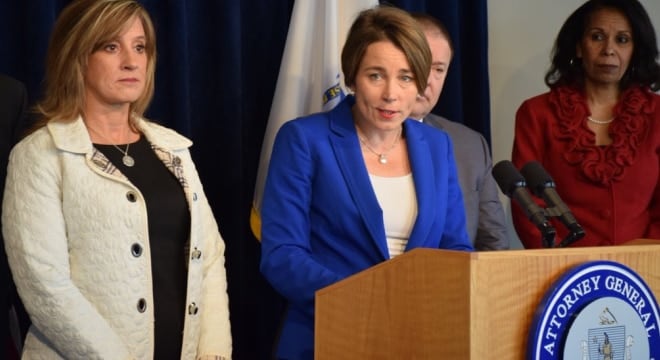 A reinterpretation of the Commonwealth’s gun laws by Massachusetts’ Attorney General Maura Healey has withstood the first round of a legal challenge.

On Friday, U.S. District Court Judge William Young dismissed a lawsuit filed by four gun dealers and gun rights group against Healey’s “enforcement notice” expanding the state’s longstanding ban on certain semi-automatic firearms to include guns that, up to that time, were considered “Massachusetts-compliant.” Young, an appointment to the federal bench by President Reagan, did not agree with the argument advanced by those seeking to overturn the ban that such guns and their magazines are protected by the Constitution.

“Assault weapons and LCMs [large capacity magazines] — the types banned by the Act — are not within the scope of the personal right to ‘bear Arms’ under the Second Amendment,” Young said in his 47-page ruling. Falling back on the words of the author of the ruling in the 2008 Heller case, Young went on to refer to the late Justice Antonin Scalia’s comments about M-16 rifles, the select-fire variant of the AR-15, by saying, “Weapons that are most useful in military service, as Justice Scalia later observed, fall outsides the scope of the Second Amendment and may be banned.” Young brushed away the differences between the two rifles, saying they were “almost identical” except for the mode of firing.

Young also felt that magazines capable of holding more than 10 rounds of ammunition were likewise “indicative of military firearms” and thus out of Constitutional protection, and, while acknowledging the popularity of the AR-15 and similar guns in circulation by the millions, said that argument had no bearing on the Second Amendment.

The National Rifle Association blasted that logic. “It is outrageous that Judge Young is taking advantage of the fact that Justice Scalia is unable to refute such a claim,” the group said in a statement, arguing Scalia’s position on Second Amendment protections for AR-15s has long been documented. “In the 2015 Friedman v. City of Highland Park case, Justice Scalia joined a dissent which stated that the decision by millions of Americans to own AR-style rifles for lawful purposes ‘is all that is needed for citizens to have a right under the Second Amendment to keep such weapons.’”

In 2016, Healy declared she was banning the sale of “copycat” rifles that shared common parts such as triggers or bolt carriers with AR-15s, AK-variants and others on the Commonwealth’s prohibited “assault weapons” list, saying that as many as 10,000 had been legally sold in the state last year. This led to a rush on stores by gun owners seeking to buy the newly prohibited models, as well as pushback from lawmakers and regulatory agencies. In the end, four gun dealers and a firearms advocacy group filed suit in federal court seeking to overturn the new rules, which Young upheld last week.

As for Healey, she took Young’s ruling as a solid validation of her enforcement action. “Today’s decision upholding the Assault Weapons Ban vindicates the right of the people of Massachusetts to protect themselves from these weapons of war and my office’s efforts to enforce the law,” said Healey in a statement. “Strong gun laws save lives, and we will not be intimidated by the gun lobby in our efforts to end the sale of assault weapons and protect our communities and schools. Families across the country should take heart in this victory.”

The ruling was acclaimed by gun control groups to include the Brady Center and Giffords who said the court rightfully found that the “Second Amendment does not extend to protect the civilian possession of military weapons of war.”

The case may be appealed by the plaintiffs to the First Circuit.