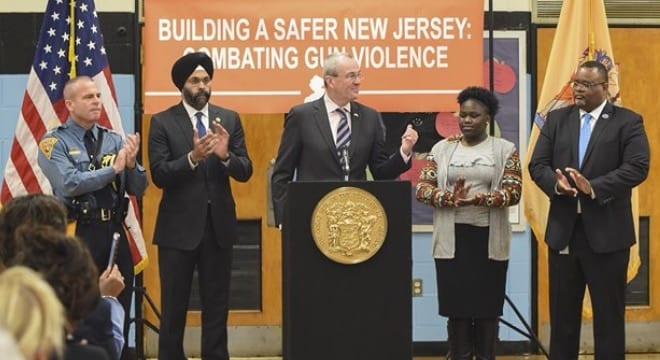 New Jersey Gov. Phil Murphy last week inked an executive order to publicize firearm trace data in the state with an eye towards focusing public awareness on illegal gun use.

Murphy, a Democrat who strongly backs gun control initiatives in the state, signed Executive Order #21 at a middle school in Asbury Park along with state Attorney General Gurbir Grewal and State Police Superintendent Col. Patrick Callahan. The directive requires monthly and quarterly publication of data on gun crimes and the source states of firearms recovered by authorities.

Murphy, holding the state has seen 500 gun deaths since 2016, said the regular data dump “will allow residents to see how gun violence impacts their communities and gain a fuller understanding of how firearms are trafficked into New Jersey from other states.”

A statement from Murphy’s office says 80 percent of guns used in crimes committed in New Jersey come from outside of the state. According to information from the federal Bureau of Alcohol, Tobacco, Firearms and Explosives in their 2016 trace data report on the state, 3,918 guns were documented in New Jersey, mostly pistols. Of that amount, source states were identified in 2,477 guns with New Jersey-bought firearms accounting for 521. The report found 56 firearms were linked to homicides while most were associated with weapons possession charges. About a third of all traces were simply for found guns with no direct link to a crime. Many had been in circulation for years, with New Jersey’s “time-to-crime” rate, or period from purchase to being traced, calculated at 13.5 years, higher than the national average of 9.79 years.

Giffords applauded the move by Murphy, with David Chipman, a former ATF agent now working for the gun control group arguing that “Congress has done the gun lobby’s bidding by squashing any attempt to conduct federal research into the public health problem that is gun violence,” and Murphy’s bid to push out gun trace information was “a breath of fresh air.”

The Association of New Jersey Rifle & Pistol Clubs, on the other hand, said that the Governor’s release of already public information is a move “propagandizing gun crime” and will be manipulated to fit an agenda.

“The reporting would be entirely one-sided, and would completely ignore reporting of the hundreds of thousands of times each year nationwide that the mere presence of a legal firearm stops crime, often without a shot fired,” said the group in an alert.

The first report from Grewal’s office is expected next month.