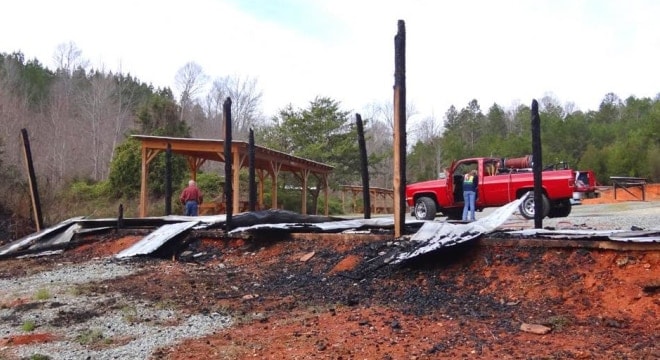 Club officials say the fire was a “sophisticated arson, not some dumbasses with cigarettes and lighter fluid.” (Photo: Thurmon Gallimore via Facebook)

A private shooting range run by a club in Randolph County is trying to rebuild following an intentional fire that burned down a number of range structures.

The non-profit Triad Action Shooting Klub in the Trinity area is offering a $5,000 reward for information leading to the conviction of those involved in the arson of their facility last week. Club officials said three of five covered shooting areas and most of the shooting benches were destroyed. Randolph County Fire Marshal Erik Beard confirmed the fire was intentionally set.

In a fundraiser for the club, TASK’s president said that the two structures left unburned were only saved from destruction “because the fuses to the gas failed” and each had five one-gallon containers of gasoline “placed strategically next to the wooden posts that support the roof,” leading to the conclusion that the event was a “sophisticated arson, not some dumbasses with cigarettes and lighter fluid.”

The club says all five shooting lines are currently open, and they intend to rebuild with or without any help.