Background checks for gun parts surged last month as the president signaled a willingness to increase regulations in the wake of several high-profile mass shootings.

Dealers submitted more than 68,000 applications to the National Instant Criminal Background Check System for transfers under the FBI’s “other” category in March — nearly doubling the rate recorded a year ago and spiking 45 percent in just one month.

The FBI defines the “other” category as referring to “frames, receivers and other firearms that are not either handguns or long guns (rifles or shotguns), such as firearms having a pistol grip that expel a shotgun shell.” The agency likewise breaks down applications by handguns, long guns and “multiple,” suggesting more than a single type of firearm transferred at once.

The only month in NICS history to record higher levels of “other” transfers came in December 2016, when dealers processed nearly 112,000 applications in the category, capping off the busiest year ever for background checks.

Estimated gun sales — the sum total of transfers in the handgun, long gun, multiple and other categories — totaled 1.4 million, an 11 percent spike over last year and 16 percent above 2016. 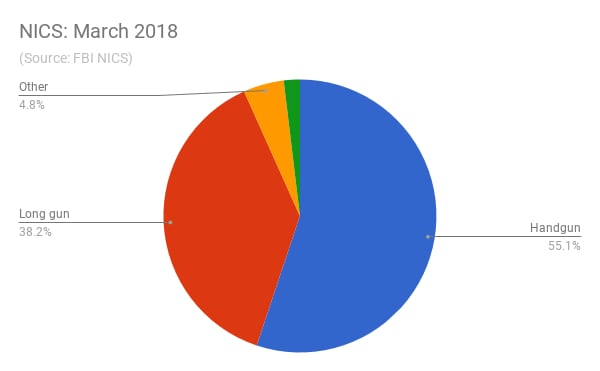 The sharp uptick follows six weeks of intense public debate about the role of stricter gun regulations in preventing mass shootings after a teenager armed with an AR-15 murdered 17 people at his former high school in Parkland, Florida on Valentine’s Day.

Investigators later revealed the gunman’s mental health issues were well known to state and local authorities years before the attack. A concerned family friend tipped off the FBI in January about the shooter’s growing stockpile of firearms and increasingly violent tendencies to no avail — a crucial mistake the agency has since acknowledged.

In response, Congress enacted stiffer penalties for state and federal agencies who fail to update criminal records in the databases feeding NICS as part of a budget deal struck last month to keep the government operating until September. The Department of Justice — at the insistence of President Donald Trump himself — proposed a new rule banning bump stocks, six months after the devices were found attached to a dozen rifles in the Vegas shooter’s hotel suite.

The corresponding spike in background checks follows a predictable trend often witnessed after other high-profile mass shootings. In December 2012 — the same month as Sandy Hook — gun sales spiked 61 percent. The second half of the month accounted for eight of the biggest days for background checks that year. Four of them made the FBI’s top 10 busiest days ever list and the week after the shooting still ranks as the single busiest week in NICS history.

The week of Feb. 26 through March 4 ranks the eighth busiest week in history with 695,503 applications processed. It’s the same week a wave of corporations — including Dick’s Sporting Goods, Walmart, Kroger and L.L. Bean — announced changes to their firearm policies in the wake of the Parkland shooting.