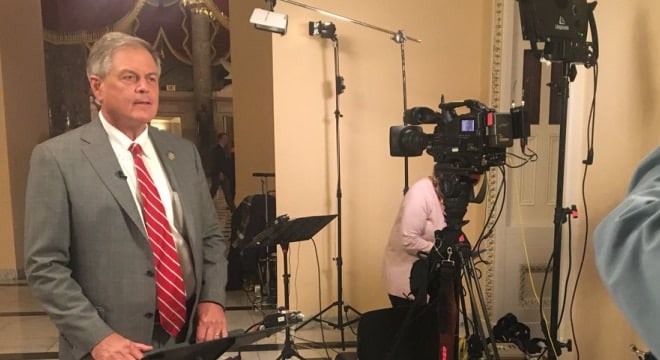 Norman, who spent more than a decade in the South Carolina state legislature, was elected in 2017 to Congress to replace U.S. Rep. Mick Mulvaney, who joined the Trump administration as OMB Director (Photo: Norman’s office)

Democrats in South Carolina are seeking an investigation into Republican U.S. Rep. Ralph Norman after he placed his revolver on a table during a meeting with constituents.

As part of his regular series of informal Coffee With Your Congressman meetings, Norman placed his loaded .38-caliber Smith & Wesson revolver on the table while speaking with gun control advocates from Moms Demand Action last Friday morning at the Rock Hill Diner. This triggered a call from South Carolina Democratic Party chair Trav Robertson to request a State Law Enforcement Division investigation, arguing the Norman may have broken the law.

“As any truly responsible gun owner knows, you cannot brandish your weapon without an imminent threat,” Robertson said. “This is a felony offense and punishable by up to five years in prison.”

In response, 16th Circuit Solicitor Kevin Brackett has distanced himself from a possible prosecution of Norman saying, “There was no criminal intent here,” while SLED has announced only that they will review the request from Robertson.

Norman, for his part, contends he did nothing wrong, that he has a valid concealed weapons permit, the diner had no policy against firearms and he believes no laws were broken. He even said the gun control advocates at the time did not act distressed by the revolver.

“At no point did anyone at our meeting say they were threatened, nor did anyone leave early,” Norman said. “In fact, we continued with our discussion, laughed, smiled, shook hands and snapped pictures together.”

The advocates involved later released a statement that the Republican had made them feel unsafe and that his action “was a far cry from what responsible gun ownership looks like.”

Norman told the Post and Courier after the incident that he showed off the gun in an attempt to make a point that firearms are not the problem in gun violence.

“I’m not going to be a Gabby Giffords. I don’t mind dying, but whoever shoots me better shoot well or I’m shooting back,” he said, referring to the former Congresswoman’s 2011 shooting in Arizona. This drew its own rebuke from the Giffords organization and Republican U.S. Sen. Jeff Flake, who represents Arizona in the Senate, the latter of which said the comment was “inappropriate and inconsiderate.”