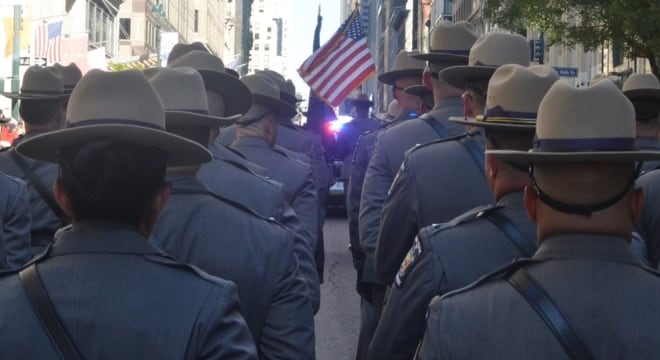 Authorities caution gun owners who do not recertify that they would lose their registration (Photo: NY State Police)

Thousands of New Yorkers who registered their guns under the Secure Ammunition Firearms Enforcement Act are now up for their first periodic recertification.

The New York State Police last week announced the upcoming process to recertify Assault Weapon Registrations, due every five years. The agency, responsible for regulating compliance with most aspects of the 2013 SAFE Act, has set up a dedicated webpage for gun owners to check the status of their registration and due date on their recertification. Officials also urge that the free process can be accomplished by downloading the required form and dropping it off at State Police barracks.

“As part of the recertification process, licensees must affirm that they are not prohibited from possessing firearms under state and federal law, and must also confirm certain personal information,” said the NYSP in the announcement, cautioning gun owners who do not recertify that they would lose their registration. Possession of an unregistered gun classified as an assault weapon in New York is a Class A misdemeanor that can result in one year in prison and the weapon being declared a nuisance, subject to removal by police.

Under the SAFE Act, the definition of “assault weapon” was expanded to include any semi-automatic rifle with a detachable magazine that has one or more of 10 cosmetic traits, including a pistol grip, folding stock, threaded barrel or bayonet mount, among others.

At the time of implementation of the SAFE Act, it was estimated that as many as 1.2 million firearms in the Empire State would have been subject to registration. However, information obtained through court order found that just 44,485 guns were logged by the state by 2015, pointing at massive non-compliance. Prior to the registration deadline, some gun rights advocates in the state held events where registration forms were burned or shredded while others simply converted firearms to be compliant with the new mandate.

A similar SAFE Act-mandated re-certification deadline recently left thousands of pistol owners in New York with expired registrations, though State Police caution they will not take action on those who “unknowingly failed to recertify.”