Bank of America will end financing for 'military-style firearms' 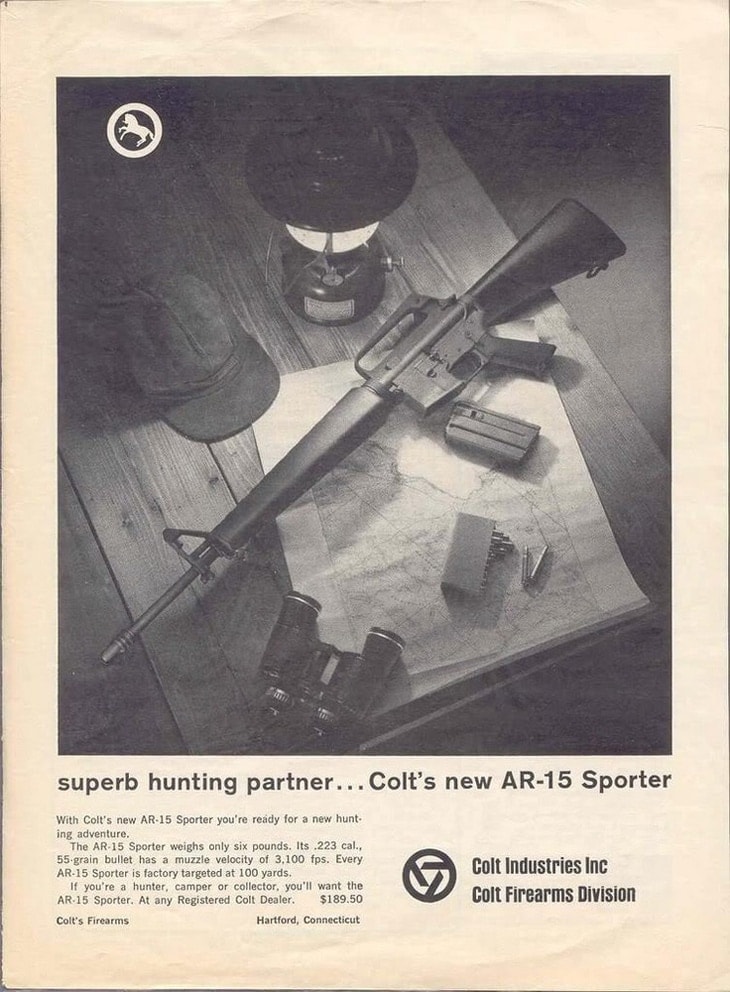 A Colt advertisement from 1964 showing an AR-15 rifle. (Photo: Colt via NSSF)

A Bank of America executive said on Tuesday the company will end financing for manufacturers of “military-style” rifles for civilian buyers.

“We have had intense conversations over the last few months and it’s our intention not to finance these military-style firearms for civilian use,” BoA vice chairwoman Anne Finucane said during an interview with Bloomberg Television.

Although her comments reiterate points the company made previously, it’s the first time a company executive said it publicly. “We want to contribute in anyway we can to reduce these mass shootings,” Finucane said. “That’s such a tragedy in the United States.”

Yet, as Finucane clarified, BoA has only a few clients that make such firearms. “We’re in discussions with them, we have let them know that … it’s not our intent to underwrite or finance military-style firearms on a go-forward basis,” she said.

Finucane said the bank has received “mixed” reactions to the decision. “We’ll just leave it at that,” she said, adding the company will work with clients impacted by the decision during their transition.

However, Finucane said that BoA is not yet ready to pull the plug on retailers that sell military-style firearms. “The problem with that is that gets into civil liberties and Second Amendment. That’s a good public dialogue, but that’s a ways off,” she said.

BoA is the second major bank to take a definitive stance against the interests of the gun industry since the school shooting in Parkland, Florida, that left 17 people dead and 15 others injured. Last month, Citigroup’s chief executive published new policy guidelines for gun businesses interested in receiving financing, which included restricting gun sales to buyers under the age of 21.

Yet, Wells Fargo & Company defended its involvement in the gun industry, saying clients pass “a strict due diligence process” before they’re accepted as customers. Wells Fargo reportedly has loaned some $431.1 million to gun companies since 2012 and provides a $28 million credit line to the National Rifle Association.

Gun control group Everytown for Gun Safety, which has been financially supporting the student-led movement influencing the business world and also published a set of guidelines for companies wanting to follow suit, applauded BoA’s announcement.

“When the second-largest bank in the U.S. takes concrete steps to prevent gun violence, it sends a clear message to the entire industry: It’s time for every financial institution to do their part,” said John Feinblatt, Everytown president, in a statement. “We applaud Bank of America for walking the walk on gun safety.”

“We as an industry would welcome the opportunity to sit down with Bank of America executives to explain our industry’s perspective and to discuss what really would work to keep firearms out of the hands of those who should not have them,” said Mike Bazinet, a NSSF public affairs director. “We should be part of the discussion.”

Bazinet pointed to Finucane’s use of “military-style firearms” when referring to semi-automatic rifles as an indication BoA hasn’t thought the policy change through. “It is not a military firearm and focusing on it will not improve public safety even if that is a sincerely held hope,” he said.