State officials decide not to charge Congressman over gun incident 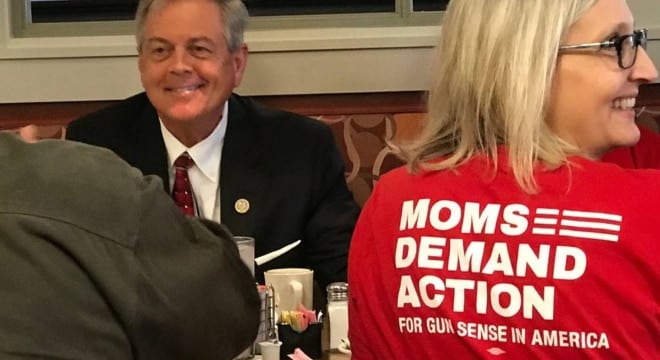 Norman last week placed his revolver on the table while talking to gun control advocates, saying “Guns don’t shoot people. People use guns to shoot people. I am tired of blame being placed on the police, NRA, and guns themselves.” (Photo: Ralph Norman via The Greenville News)

South Carolina officials have decided not to rise to demands from state Democrats to prosecute U.S. Rep. Ralph Norman over an event where he displayed his handgun.

South Carolina Attorney General Alan Wilson and the State Law Enforcement Division have announced they will not seek charges against Norman, a Republican who found himself under scrutiny from gun control advocates and local Dems after a meeting with constituents where the lawmaker produced his revolver and set it on the table. Wilson’s office, working with SLED, said that in evaluating the statements of the event, they couldn’t find a crime worth pursuing.

“Some have complained about the Congressman’s actions,” Wilson said in a statement. “However, our conclusion must be based on the law and sound prosecutorial discretion. In this case, this is not a prosecutable offense.”

South Carolina Democratic Party chair Trav Robertson requested an investigation into Norman’s actions, arguing he may have broken the law when he placed his loaded .38-caliber Smith & Wesson revolver on the table while speaking with gun control advocates from Moms Demand Action last Friday morning at the Rock Hill Diner. Local solicitor Kevin Brackett on Monday declined to seek charges against Norman saying, “There was no criminal intent here.”

Norman, a licensed Concealed Weapon Permit holder, said he only displayed the gun to prove a point about how safe they are in the right hands, saying, “Guns don’t shoot people. People use guns to shoot people. I am tired of blame being placed on the police, NRA, and guns themselves.”

Since then, Moms Demand Action founder Shannon Watts has used the incident to direct donations to Democrat Archie Parnell, a former Goldman Sachs attorney running for Norman’s seat in the House this November.

South Carolina Congressman @RalphNorman, who brought a loaded gun to a @MomsDemand meeting and put it on the table during their conversation about gun safety, only won 51% to 47% in a 2017 special election. This is who is running against him – donate accordingly. #scpol https://t.co/rUqxGAeHEs