Tennessee student stands by her graduation photo with handgun 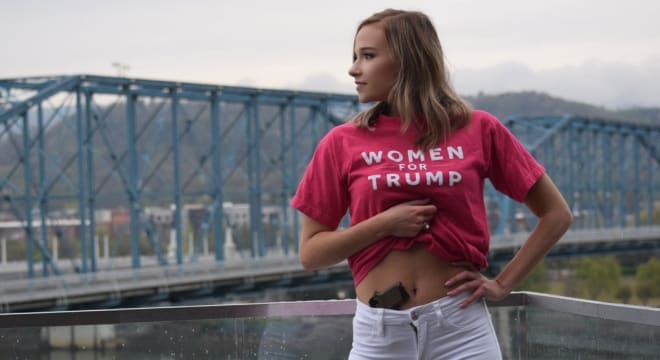 University of Tennessee student Brenna Spencer caught the attention of many with her posed photo taken by a Chattanooga landmark.

Spencer, who reportedly snapped the pic outside of the Hunter Museum of American Art and is graduating from UT Chattanooga this Spring, said, “I don’t take normal college graduation photos…” in her post to Twitter. The post was liked over 83,000 times and retweeted 12,000.

Some safety conscious observers called out the 22-year-old concealed carry permit holder for not wearing a holster in the photo, to which she clarified that “I am wearing a belly band, I pulled my gun out further so it could be seen better, for those of you who are so concerned.”

I am wearing a belly band, I pulled my gun out further so it could be seen better, for those of you who are so concerned.

Texas resident Antonia Okafor, a vocal campus carry advocate and founder of EmPOWERed, a group that advocates on behalf of gun-owning women, posted a similar image tagging Spencer in a salute.

However, not all were impressed, and tagged the Chattanooga Police Department, arguing Spencer had broken the law, an allegation she denied.

Sporting a Women for Trump shirt, a LinkedIn profile for Spencer lists her as a field director for Turning Point USA, a student-based conservative nonprofit organization.