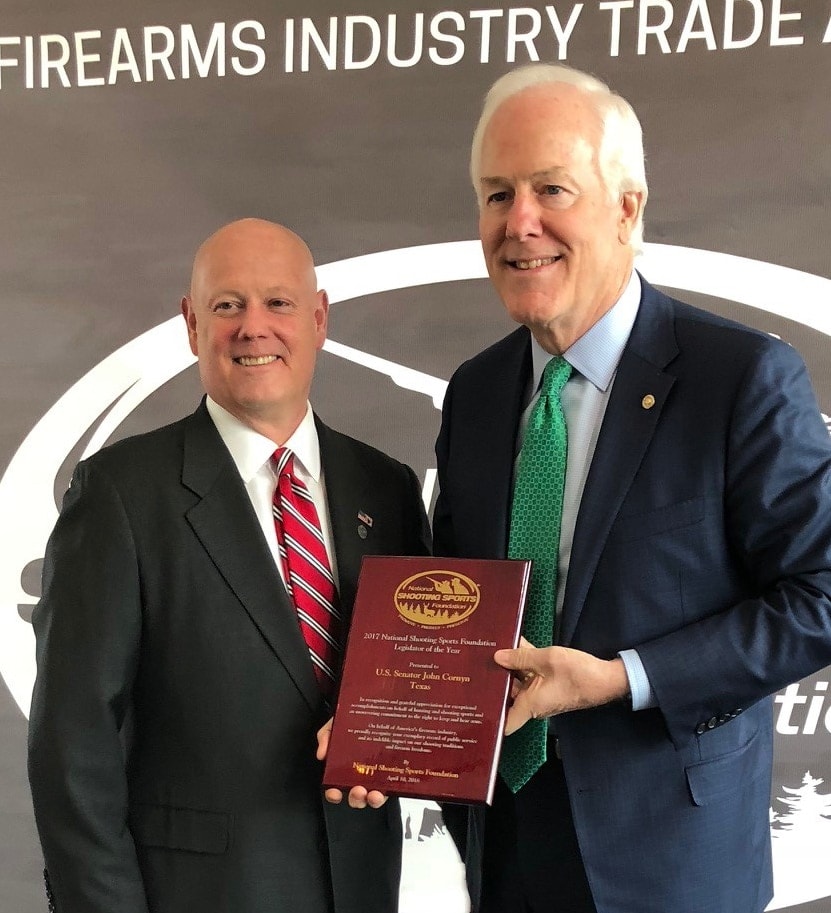 The gun industry’s largest trade association honored Sen. John Cornyn as its 2017 “Legislator of the Year” during an annual meeting in Washington, D.C. this week.

The Texas Republican earned the award from the National Shooting Sports Foundation on Wednesday for his leading efforts to pass background check reform after a gunman murdered 26 people at a church in Sutherland Springs — just 35 miles southeast of San Antonio — back in November.

State and federal investigators said the shooter should’ve never owned the semi-automatic rifle used in the attack. Discharged from the military in 2014 after serving time in confinement for assaulting his wife and stepson two years earlier, Air Force officials never forwarded the his criminal records to the Pentagon.

“We salute Senator Cornyn for his outstanding leadership in the U.S. Senate, particularly for his tireless efforts to advance S. 2135, the Fix NICS Act” said Lawrence G. Keane, NSSF senior vice president for government and public affairs and general counsel, in a news release Tuesday. “This legislation addressed a long-standing priority for NSSF and many in Congress to make the FBI National Instant Criminal Background Check System (NICS) work as intended by requiring all federal agencies and incentivizing the states to submit all disqualifying criminal and mental adjudications. This is what common ground for all in the firearms debate looks like and we are honored Senator Cornyn chose to name his legislation for the NSSF campaign of the same name.”

NSSF spearheaded the aptly-named Fix NICS campaign in 2012 to improve state reporting to the federal background check system. Their efforts spawned legislation in 16 states, boosting total disqualifying records available on NICS 170 percent from 1.6 million in 2012 to almost 4.5 million in 2016.

Congress passed the legislation as part of a budget deal struck last month to keep the government operational until September.

“The Fix NICS Act will save lives, and I’m grateful for the hard work of affected families and advocates like the National Shooting Sports Foundation to finally fix and strengthen the criminal background check system,” Cornyn said Tuesday. “Thank you for this recognition and for your unwavering commitment to reducing the likelihood of tragedies like what happened in Sutherland Springs.”