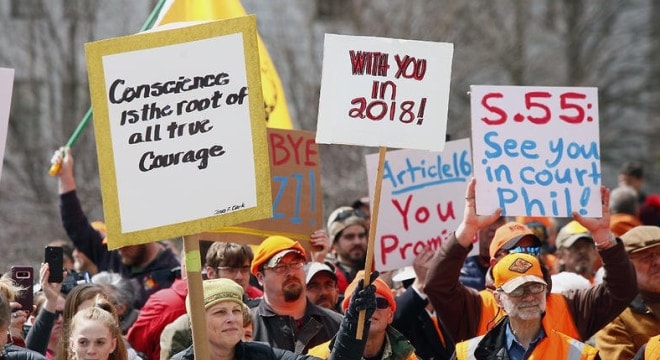 Pending gun control legislation was a hot-button item with the crowd at the Vermont Statehouse in Montpelier as Gov. Phil Scott inked a series of bills into law. (Photo: Vermont Public Radio)

Among both cheers and jeers, Gov. Phil Scott approved a series of new gun restrictions Wednesday in a public bill signing.

Scott, a Republican who is avowedly a supporter of the Second Amendment, signed bills H.422, S.221, and S.55, into law on the steps of the Statehouse in Montpelier, surrounded by a crowd divided over the issue of gun politics.

The measures would remove guns from those thought to be “at risk” and from those arrested or cited on domestic assault charges as well as place restrictions on magazine capacities, bump stocks and gun sales to those under age 21.

“I support the Second Amendment, but I had to ask myself, ‘are we truly doing everything we can to make our kids and communities safer?'” Scott said. “Because if we’re at a point where our kids are afraid to go to school, and parents are afraid to put them on a bus; or police don’t have the tools they need to protect victims of violence; or families can’t step in to prevent a loved one from taking their own life; then who are we?”

H.422, which lawmakers passed with unanimous support, speeds up removals of firearms from those charged or cited in the state over some domestic violence or abuse accusations.

S.221 adds a mechanism to Vermont law to allow for so-called “extreme risk protection orders” which would allow family members or authorities of a person thought to be a threat to themselves or others to petition the court for an order to seize any guns possessed by the individual pending a hearing.

The most controversial of the three measures, S.55, barely passed the legislature. It will restrict magazine capacity to 15 rounds on handguns and 10 rounds on rifles, ban bump stocks and raise the age to buy guns in Vermont to 21. Magazines already in circulation will be grandfathered while adults 18-to-20 can still purchase rifles and shotguns if they have had military or law enforcement training or have passed a hunter’s education course. There is also a carve-out for Vermont-based gun makers as long as they market their magazines outside of the state.

Feeling betrayed, gun rights advocates labeled Scott, who was A-rated by the NRA in his last election campaign, as “Flip-flop Phil” and even “turncoat” and “traitor”  during the bill signing event. Some, dressed in hunter’s safety orange, came complete with toy swords affixed to their back in reference to the Governor’s actions. During his 2016 campaign, Scott repeatedly said he was not in favor of changing any of the state’s gun laws.

“We see beyond the propaganda that attempts to portray any positive aspects of S.55 and see it as being completely ineffectual at its purported purpose of making schools, or anyone else, safer,” said the Vermont Federation of Sportsmen’s Clubs. “The only reason to pass ‘we did something’ legislation that virtually all law enforcement indicated was unenforceable and therefore completely ineffective is to create a framework for subsequent laws that will likewise be ineffective and unenforceable, but ever more restrictive.”

On the other side of the coin, Scott’s move was praised by both local and national gun control groups of all stripes.

“Vermont has long had some of the most lax measures on gun safety, but today is more than a step in the right direction – it’s a leap,” said Avery Gardiner, co-president of the Brady Campaign.

THANK YOU @GovPhilScott! We need more lawmakers like you who are willing to evolve their positions on life or death issues like gun violence prevention. It is one thing to offer thoughts and prayers, it's another to follow through with action. #vtpoli https://t.co/qy6i6f9owm