3 charged in connection with moving undocumented Miniguns to Mexico 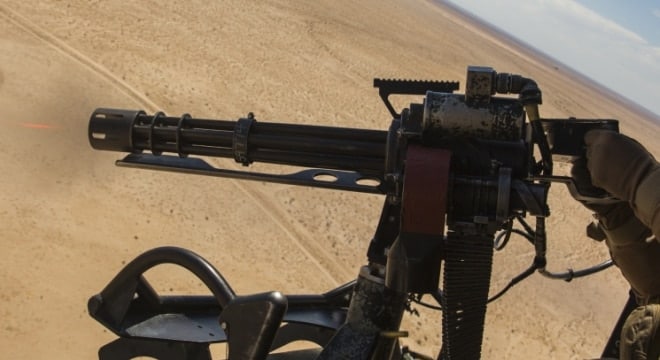 The M134 electric Minigun system is a six-barreled rotary machine gun chambered in 7.62x51mm NATO that can fire between 2,000 and 4,000 rounds per minute. (Photo: Department of Defense)

Charged with a litany of gun violations to include possessing and transferring unregistered machine guns and unlawfully exporting firearms to Mexico were Tyler Carlson, 28, of Austin; Michael Fox, 69 of Georgetown; and Tracy Garwood, 62, of Scottsdale.

According to court documents, in June 2016, Customs agents inspecting a vehicle crossing into Mexico at Anzalduas, Texas, recovered 15 AK-47 style rifles, four handguns, 4,000 rounds of ammunition and the power supply and feed chute for a Garwood M-134G Minigun. This triggered an investigation by the Bureau of Alcohol, Tobacco, Firearms and Explosives and Homeland Security Investigations that ultimately labeled Carlson as the go-between who worked to smuggle as many as 200 guns across the border to Mexico without a license going back to 2014, paid for in over $270,000 in postal money orders.

Prosecutors hold the firearms were obtained by Carlson from Fox, a federal firearms licensee and a former lawman who, with the help of Garwood, also built a number of off-the-books Miniguns for the man. Garwood, who started a Scottsdale-based company specializing in an improved generation of the multi-barreled 7.62mm machine gun in 1999, allegedly told the ATF that a number of M134G rotor housings– considered the receiver of the Minigun– were destroyed, but the parts, controlled items under the National Firearms Act, were recovered in a 2017 search warrant at Fox’s home in Texas with their markings partially obliterated.

Carlson faces 10 years in prison while Fox and Garwood face five each. “We need to vigorously enforce the firearm laws that are on the books, and these charges are part of that mission,” said U.S. Attorney John F. Bash in a statement.