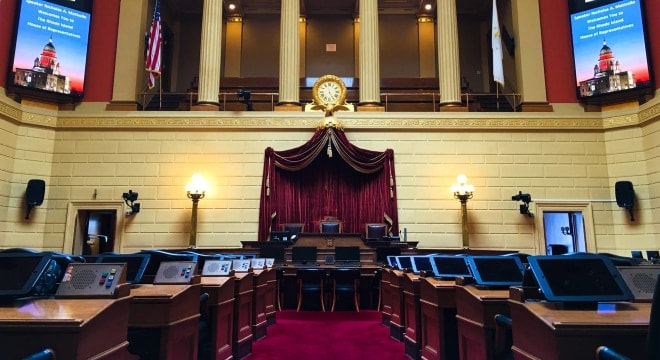 Dems in the Rhode Island House of Representatives gave fast approval to a pair of gun control bills this week. (Photo: RI House)

Measures banning bump stocks and allowing for gun seizures in some cases sailed passed lawmakers in Providence on Thursday.

The proposals, introduced in the wake of mass shootings which galvanized support, would outlaw bump stocks and institute a so-called “red flag” law. Each bill passed with more than 60 votes in the overwhelmingly Democrat-controlled 75-seat chamber and now proceed to the Senate.

The bump stock prohibition, H 7075, would ban all types of sliding buttstocks that harness a gun’s recoil to “rapidly fire the weapon” as well as any binary trigger or crank. Those who modify a semi-automatic firearm in the state with any of the defined devices could face as much as 10 years in prison as well as establish penalties for simple possession.

“Currently there is some ambiguity to whether or not applying a bump stock to one’s weapon is legal in Rhode Island, but it is still legal to purchase one,” said state Rep. Robert E. Craven, D-North Kingstown, sponsor of the measure. “This bill will end that practice, making the sale and possession of bump stocks, even if they are not affixed to a weapon, illegal and punishable by the full extent of the law.”

The red flag law, H 7688, would allow police to temporarily confiscate guns and firearm permits from those deemed by a judge to be a potential threat to themselves or others. The order would last one year and would be reported to the National Instant Criminal Background Check System, barring the subject from purchasing firearms from any licensed gun dealer. The bill adds teeth to an executive order issued earlier this year by Rhode Island Gov. Gina Raimondo, directing authorities in the state to use all legal steps to remove firearms from the home of those they feel are a danger.

“This legislation is an effective step and an important tool to help law enforcement intervene and prevent tragic outcomes from occurring,” said House Speaker Nicholas Mattiello, D-Cranston, a bill co-sponsor.

Besides Second Amendment advocates who are opposed to the measure, the ACLU of Rhode Island has publicly come out against the bill, issuing a  14-page analysis slamming the proposal for being overly broad and by nature speculative, making it ripe for potential abuse.