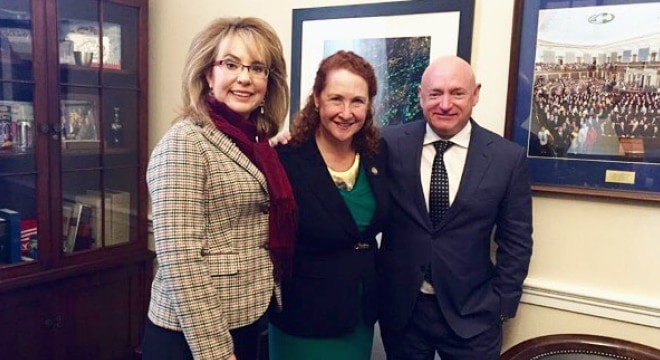 A group of Democrats from states that require licenses to purchase or own handguns is looking to take the concept nationwide.

The sponsored legislation, H.R.5490, would promote handgun licensing programs in states by means of a federal grant program. Introduced last week by lawmakers from Connecticut, Illinois, Maryland and North Carolina, the proponents argue that requiring a person to obtain a permit before they can buy a pistol or revolver saves lives.

“Research shows that permit to purchase laws are effective and prevent guns from getting into the hands of dangerous individuals. In my home state of Connecticut, permit to purchase laws worked to reduce firearm homicides by 40 percent,” said U.S. Rep. Elizabeth Esty, D-Conn. “The Handgun Purchaser Licensing Act is one step forward we can take to make our communities safer while respecting the rights of law-abiding gun owners.”

Under the guidelines of H.R.5490, the Department of Justice would establish a grant program for local, state, and tribal governments to develop and evaluation of handgun purchaser licensing requirements. As a minimum, such programs would require that applicants be at least 21 years old and apply for a permit or license for a handgun through a law enforcement agency. The authorization would only be granted following completion by the agency of a background check for which fingerprints and a photograph would be submitted.

In a statement from Esty’s office, the measure is backed by gun control organizations to include the Coalition to Stop Gun Violence, Giffords, and the Newtown Action Alliance.

The lawmakers and gun control advocates supporting the bill cite a 2015 study by the John Hopkins Center for Gun Policy and Research, part of the Johns Hopkins Bloomberg School of Public Health, that held Connecticut saw a 40 percent drop in the state’s firearm homicide rate after a 1995 law was adopted requiring a permit in order to purchase a handgun. Critics of the study argue the researchers cherry-picked their numbers and compared their data sample to a “synthetic” Connecticut to arrive at the claim. Further, critics hold that the decline in murders observed in the study was part of a national drop in violent crime unrelated to the new law and that Connecticut’s crime rate has climbed since 2015.

The laws themselves are often controversial.

The first state to adopt handgun licensing, New York, did so under the Sullivan Act, a 1911 law that requires anyone desiring a firearm small enough to be concealed to obtain a license. Even a century later, the law has been subject to legal challenges from those who hold licenses can be elusive, with applicants often waiting years or denied outright.  In New Jersey in 2015, the case of a woman killed in her front yard by her ex-boyfriend while she was still waiting for her application for a firearms permit to be granted made national headlines. Meanwhile, critics of North Carolina’s Pistol Purchase Permit argue the practice was adopted in that state in 1919 as part of Jim Crow laws to strip minorities of their Second Amendment rights.

Esty’s bill has been referred to the House Committee on the Judiciary.