Gun advocates rally in state capitols for the Second Amendment 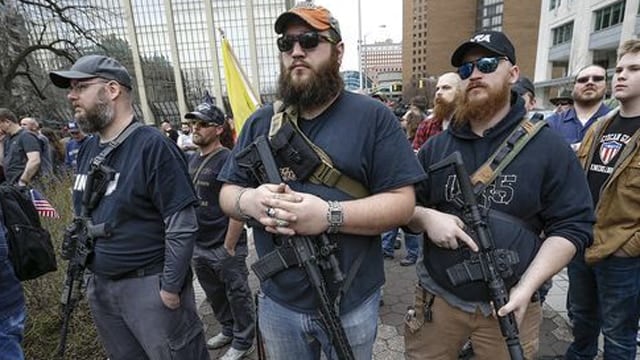 Gun advocates across the country rallied at state capitols over the weekend in support of the Second Amendment.

The newly-formed National Constitutional Coalition of Patriotic Americans encouraged its member organizations in each state to assemble Saturday afternoon, in part, as a rebuttal to the March for Our Lives rally hosted last month.

“Modern thinkers feel the need to strip away our natural born right to self-protection by limiting the available weapons that are at our disposal,” said the coalition’s Matt Johnson on its website last month. “They blame mental illness without documentation. They blame everything except the sole responsible party, the person involved in the action.”

Advocates in at least 20 states obliged, organizing on the steps of state capitols, some waving “Don’t Tread on Me” flags and others carrying rifles, in what would be dubbed the “Americans for America” rally.

“We had a huge shooting at a kids school, and that got national attention. People get scared and they start giving things up, and they don’t realize that’s a right that was guaranteed to us by our forefathers in the Constitution,” Wendy Depaoli, 49, told the Sacramento Bee on Saturday. “We don’t want that fear factor to trample on a document that was put in stone.”

Depaoli organized the event Saturday in which roughly 200 people gathered on the steps of the California state capitol building in Sacramento.

Nicki Stallard, a spokesperson for the LGBT gun rights group Pink Pistols, told the newspaper the rally unifies gun advocates of all stripes and offers an opportunity to create a “responsibility movement.”

“I’m a transgender woman, so self-defense is extremely important. I’m in the demographic that has the highest rate of being victims of violent crime,” Stallard said. “I feel that the state of California is on its way to eliminating our right to self-defense.”

The Associated Press reports hundreds of supporters turned out at capitols in Maine, Massachusetts, Indianapolis, Georgia, Pennsylvania, Vermont, New York, Texas and Iowa, among others.

“We’re sympathetic to the fears of … the people who want to take guns away, who want to ban things, but when you look at the details of what the actual proposals are, they aren’t going to do what people think they’re going to do,” said Bill Slike III, during an interview with the Indianapolis Star. “There’s a great, huge misconception about what the proposed laws actually would do.”

Slike organized the event in Indiana, according to the newspaper. About 500 supporters showed up, all in opposition to proposed gun regulations gaining traction in state houses after 17 died in a school shooting in Florida in February.

More than 1 million participated in the nationwide March for Our Lives rallies last month. Organizers called for bans on assault weapons and high capacity magazines and wanted Congress to enact universal background checks.

“Obviously in society we do have problems with gun-related violence. So while I promote rights, I promote responsibility,” Stallard said. “I would like to motivate the firearms community to take the lead to partner with people on things that we do agree on … to reduce gun violence across our state.”