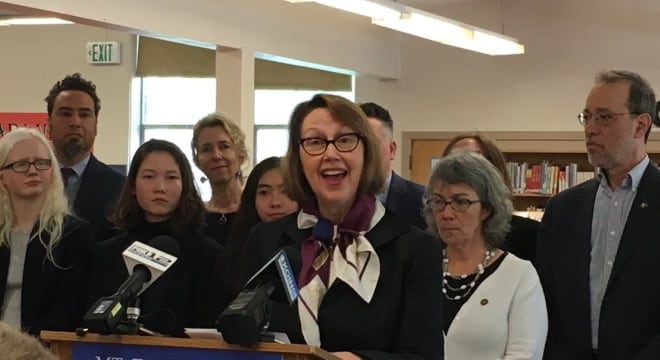 Rosenblum’s office last week announced the details on the mechanism to obtain an ERPO. Included in the release are links to a one-page explanation of the process and a four-page online application for the petition itself. The law allows police, or a member of a subject’s family or household, to file a petition with the court which could lead to an order prohibiting firearms possession if it is believed they pose an imminent risk to themselves or others.

“Many of us are asking how we can better keep Oregonians safe and keep guns out of the hands of the wrong people,” Rosenblum said. “While there is still a lot of work to do, Oregon has made significant gains to strengthen our gun safety laws.”

As explained by Rosenblum’s office, those concerned about an individual would petition the court for the ERPO, which would remove firearms and concealed handgun permits from a subject believed at risk. In addition, the order would bar the subject from buying additional firearms for one year. The court is bound to act on the request within 24-hours and must grant a subsequent hearing within 21-days if one is requested by the gun owner.

The measure, also termed a “red flag law,” passed the legislature last year, picking up only one Republican supporter along the way, and was approved by Gov. Kate Brown. The law was modeled on one adopted after a ballot referendum in neighboring Washington following a $3.5 million push by gun control groups, which in turn was based on a 2014 California law.

Second Amendment groups have blasted the ERPO process, arguing it provides no structure for those deemed at risk to receive help, or those dangerous to be taken into custody. Further, they point to due process concerns. However, a ballot initiative to repeal the law backed by state Republicans in Oregon failed to gain the needed signatures to be placed in front of voters.