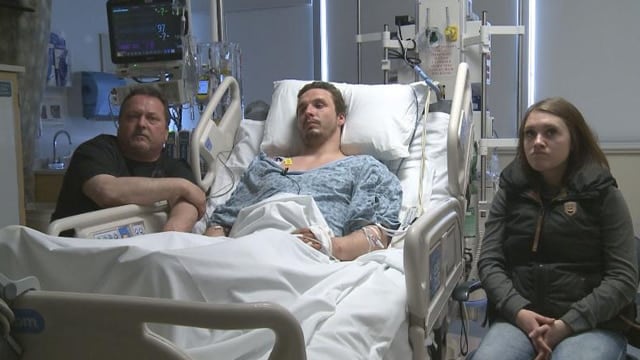 Trent Wohlers (center) in the hospital after the incident. (Photo: KTUU)

The alleged shooter in a road rage incident in Willow, Alaska, that left one man seriously injured said he acted in self-defense, but the wounded man disputes that claim.

William Stephens said he shot Trent Wohlers during a fight after Wohlers threatened to take his gun, KTUU reported. Wohlers, on the other hand, said he was driving away when Stephens fired several rounds at his car.

No arrests have been made as Alaska State Troopers are still investigating the incident, but they clarified that the incident happened just after midnight on April 3, after a man followed a woman to a clinic, where she met her boyfriend.

Wohlers told reporters that he was driving with his brother’s girlfriend when he and another driver, presumably Stephens, started “brake checking” each other. He said he followed the other driver to a health center, but that driver immediately left as a truck pulled in.

Then, the truck driver, Stephens, stepped out wielding a 12-gauge shotgun, so Wohlers swung at him and took the shotgun away. Wohlers said he pointed the shotgun at the man and demanded he leave. As Stephens walked away, Wohlers went back to his car, but then Stephens allegedly grabbed another gun and opened fire, striking Wohlers and leaving him paralyzed.

Stephens declined an interview request by reporters, saying he was waiting to hear back from his attorney, but said he was in fear for his life during the incident.