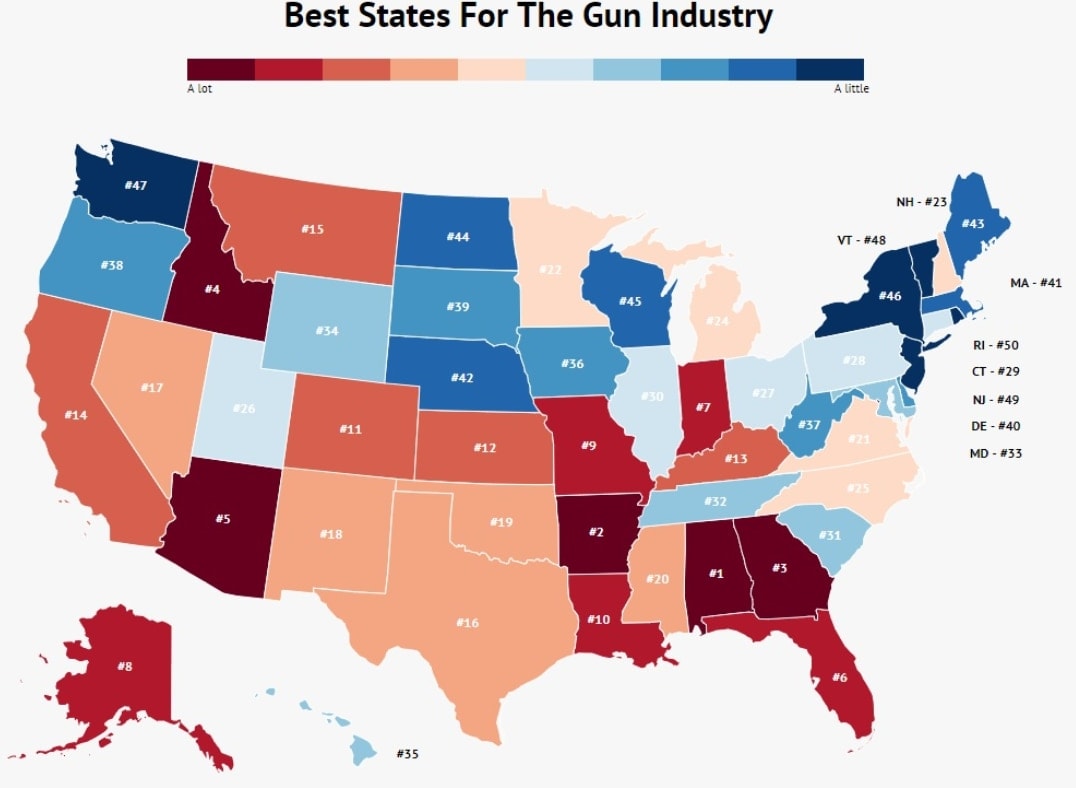 An analysis of all 50 states ranked Alabama the best place in America for the gun industry.

“A general rule of thumb emerged from the data — head south if you are looking to get one of as many as 141,500 jobs generated by companies that make, distribute, and sell guns,” said Chris Kolmar, contributor at Zippia. “Not to mention the the 159,623 jobs in ancillary industries.”

Alabama’s gun industry directly employs more than 3,200 residents, according to the most recent data compiled by the National Shooting Sports Foundation, and contributes a federal excise tax for wildlife conservation of more than $17.4 million each year. While its easily eclipsed in both categories by larger states, Zippia argues Alabama’s lax gun laws and supportive culture makes it — and many of the other high-ranking southern states on the list — the friendliest place for gun makers to operate and expand.

“Gun manufacturers prefer states that are lighter on employee rights, having a larger presence in states that are right-to-work and do not have regulations on breaks,” Kolmar said, noting employees in right-to-work states averaged nearly $15,000 less in annual wages compared to their counterparts elsewhere in the country. “So then again, maybe it is all about the money after all.”

Remington currently operates a plant in Huntsville and Kimber announced plans to open a manufacturing facility in the city of Troy in 2019. Alabama Gov. Kay Ivey said the $38 million plant will create more than 350 jobs over the next five years.

“We are pleased with the impressive track record that Alabama has with attracting and retaining world-class manufacturing companies,” said Leslie Edelman, Kimber’s president and chief executive officer, back in January. “Growing our company intelligently depends significantly on being in the right manufacturing environment, and in Troy, we have a community dedicated to our long-term success.”

The NSSF  said last week the industry added 10,000 new jobs overall in 2017, a 3 percent increase over 2016 — the biggest year ever for gun sales — and nearly double the total recorded a decade ago.

“Our industry is proud to be one of the truly bright spots in our economy as an unprecedented number of Americans have chosen to exercise their fundamental right to keep and bear arms and to safely enjoy the shooting sports,” said Stephen L. Sanetti, NSSF President and CEO. “In response to that dynamic, we have increased our direct workforce by more than 7,000 in the past year alone, adding jobs that pay an average nearly $50,000 in wages and benefits.”

Sanetti said the industry more than doubled its state and federal tax payments over the last 1o years, including the Pittman-Robertson excise tax for wildlife conservation. In total, the industry’s economic impact rose from $51.3 billion to $51.4 billion in 2017. This, despite coming “off peak production years,” the foundation said.