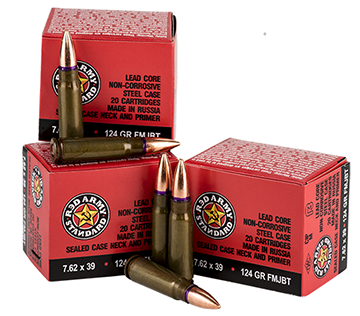 Century Arms’ Red Army Standard 7.62x39mm is back on the streets, as Century Arms announced the return of the premium, boat tail ammunition.

“We’ve spent a great amount of effort to develop what we feel is the best 7.62×39 ammo currently imported into the country,” William Sucher, the company’s Director of Business Development, said in a press release. “As the leader in the AK market, we wanted to ensure that our customers have access to the best ammo possible to run through their rifles and pistols. We have been thrilled by the reception of this sku and are working diligently on increasing capacity to meet the demand.”