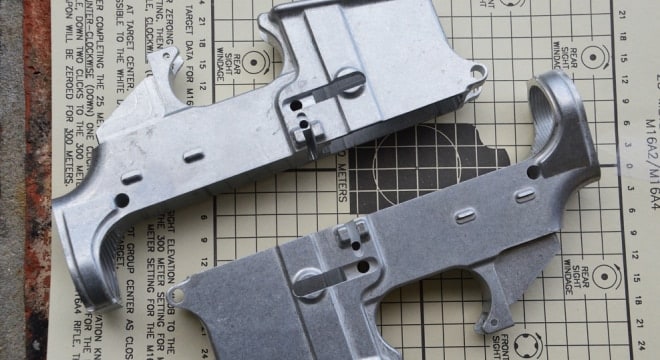 Among the bills approved by New Jersey lawmakers, Monday is one that would leave those with an unserialized 80 percent lower facing as much as three years in prison (Photo: Chris Eger/Guns.com)

Murphy, a Democrat with an agenda that includes additional gun regulation in a state that already has some of the strongest in the nation, welcomed the news that the New Jersey Senate Law and Public Safety Committee greenlighted the legislation.

“As gun violence continues to plague our country, New Jersey will lead the way by setting a higher standard for gun safety,” Murphy said in a statement. “I look forward to the full Senate voting on these bills as soon as possible to combat the public health crisis of gun violence.”

Among those bills passed was S 2465, would make it a crime to possess components to manufacture “untraceable firearms,” which sponsors characterize as “ghost guns” due to their lack of factory-applied serial numbers. Proposed by state Sen. Joe Cryan, D-Union, a former sheriff, he argues the bill is needed to keep homemade firearms off the street.

“This ‘do it yourself’ method of assembling these ‘ghost guns’ allows the owner to avoid the laws and regulations that are meant to keep firearms out of the hands of those who pose a danger to themselves or others,” Cryan said in a statement. “They are just as deadly and just as dangerous, especially in the hands of those who are prohibited from owning guns for good reasons.”

His bill would make it a crime to purchase components or kits that would enable someone to build their own unserialized firearm unless they were a licensed manufacturer. This would include popular receiver and frame blanks sold as 80 percent complete. Violations would bring as much as three years in prison and as much as a $15,000 fine.

Cryan is also a sponsor of S 160, which requires a health care professional to contact police if they think an individual they have contact with may be a threat to themselves or others. Authorities would then be obligated to check if the person has a firearms permit and evaluate obtaining an order to impound their guns from a local court.

A second measure, S 2259, establishes an Extreme Risk Protection Order process, which does much the same thing as S 160 but allows family members and friends to petition the court for a one-year gun ban on those who they feel are at risk. Both passed the committee on Monday.

“As we have seen in too many cases, individuals who are exhibiting clear signs of mental illness have been able to obtain firearms legally,” said state Sen. Loretta Weinberg, D-Bergen, sponsor of the ERPO proposal.

Other measures that passed out of committee were:

S 102 to reduce magazine capacity to no more than 10 rounds.

S 2376 that would make it harder to meet the justifiable need standard for concealed carry applications in the state, a benchmark that former Gov. Chris Christie tried to lower.

The General Assembly passed several identical measures last month which means successful floor votes in the Senate could send the proposals to Murphy in coming weeks.