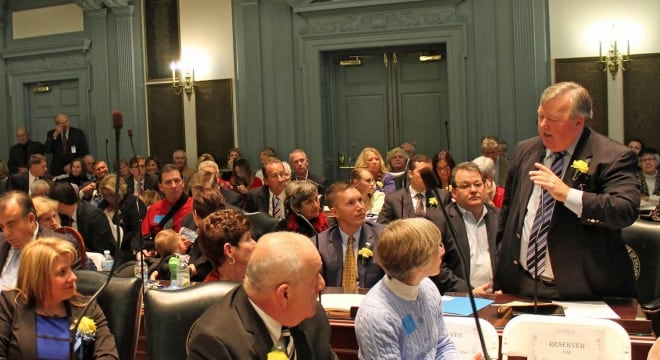 A bill introduced in the Delaware House last week would outlaw the sale of magazines capable of holding 10 rounds or more of ammunition.

The measure, HB 375, would make it a misdemeanor to sell or transfer such magazines or possess them along with a firearm that can accept them while in a public place. The sponsor of the bill, state Rep. Larry Mitchell, D-Elsmere, is candid in his assessment that, if adopted, the proposal would not stop mass shootings.

“Smaller magazines will not eliminate mass shooting events, but they can help reduce the number of bullets fired and hopefully minimize the tragic outcome,” said Mitchell, a retired police officer.

Under the guidelines of his bill, the definition of a large capacity magazine would be added to Delaware law. If passed, targeted devices already in circulation would be grandfathered but, like new magazines, they could not be sold or transferred under threat of a Class A misdemeanor, punishable by up to a year in jail and a fine up to $2,300. In addition, having an LCM and a gun that can use them in public would be made a crime.

“This is a substantial piece of legislation in Delaware’s overall gun safety reform efforts that accommodates our law-abiding citizens while balancing public safety concerns,” said Mitchell, who backed a similar measure in 2013 that tanked.

A number of chamber Republicans and gun rights organizations have forecast Mitchell’s rebooted attempt could catch flak, and, even if passed into law, would not likely deter criminals.

“A high-capacity magazine ban has been tried in several other states and there’s no empirical evidence it does anything to fulfill the intent of the sponsors,” said Jeff Hague, president of the Delaware State Sportsmen’s Association.

Mitchell is also sponsoring HB 174, which increases the penalty for straw purchases under state law, and HB 366, mandating increased use of trigger locks and gun safes.