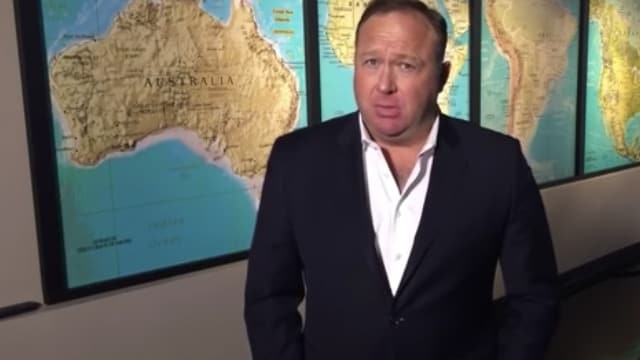 Alex Jones standing in front of a bunch of maps. (Photo: InfoWars via Youtube)

Parents of two children killed in the 2012 Sandy Hook massacre filed suit against conspiracy theorist Alex Jones, who has maintained that the horrific event was faked and possibly staged by the government.

The lawsuit, filed in a Texas state court, alleges Jones accused the plaintiffs of being actors rather than victims’ parents on his website InfoWars, Bloomberg magazine reported.

Both cases were filed Monday. Leonard Pozner and Veronique De La Rosa, parents of Noah Pozner, filed one lawsuit and Neil Heslin, father of Jesse Lewis, filed the other. They’re seeking at least $1 million in damages.

In the shooting, a 19-year-old gunman entered Sandy Hook elementary school in Newtown, Connecticut, on Dec. 14, 2012, and murdered 20 first-graders and six educators before taking his own life.

Jones’ baseless claims about the shooting have had real-world consequences. Last year, a Florida woman was convicted of harassing the parent of a Sandy Hook victim. She said she informed her belief that Sandy Hook was fake by reports by Jones’ InfoWars and other similar publications.

Earlier this month, Jones was named in another defamation suit by a Massachusetts man he misidentified as the gunman responsible for murdering 17 people and injuring another 15 at a high school in Parkland, Florida in February.

Last year, Jones faced multiple legal challenges, both professional and personal, because of baseless claims that had negative outcomes for Jones. In May 2017, Jones had to issue an apology and retract a story about Chobani for his claim that the yogurt company was connected to a rise in tuberculosis cases.

And, last March, he had to apologize and retract statements about Pizzagate, a  conspiracy that a Washington, DC-based pizzeria that fundraised for Democrats was a child sex ring. The narrative influenced a gunman to enter the establishment and open fire.

Also last year, Jones lost primary custody of his three kids to his ex-wife. In court, she argued Jones was “not a stable person.” Although Jones’ attorney argued that Jones was a “performance artist” playing a character on his radio show, Jones denied the argument.