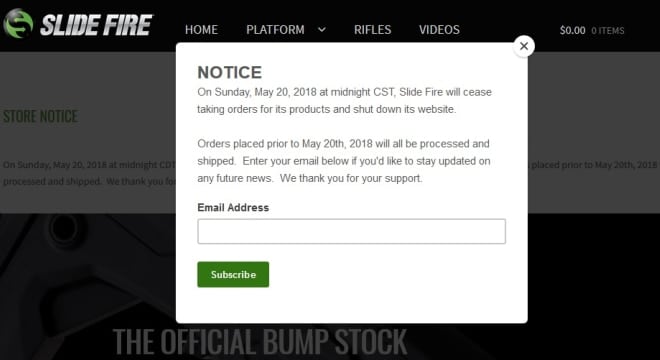 Slide Fire posted the notice on their website on Tuesday. (Photo: Screenshot)

Embattled Texas-based Slide Fire Solutions announced on their website this week that they will no longer accept orders for their products next month and will shut down their website.

The company, the primary manufacturer of bump stock devices in the country, said in a notice that their website will go dark at midnight on May 20, with orders placed prior to that date processed and shipped.

“We thank you for your support,” said the statement simply.

The company, who holds itself as the “sole patent holder of bump fire technology” with numerous patents registered, is a defendant in numerous lawsuits over the use of bump fire stocks at the Route 91 Harvest shooting last October that left 58 dead and some 850 others injured. This came in conjunction with a flood of efforts, both legislative and regulatory, to ban the stocks and a host of other trigger devices at the federal, local and state level.

Since the news broke of the device’s use in the Las Vegas shooting and looming bans, demand has run high, with Slide Fire frequently announcing on their website that they were suspending new orders until they caught up. The company has also removed the list of retailers who stock the devices from their site – a move noted by the Brady Campaign, a gun control organization behind one of the class action suits.

Slide Fire, based in Moran, Texas, has been granted numerous patents for their stocks since 2000 and has defended their niche in the marketplace, forcing competitor Bump Fire Systems out of business two years ago after a lengthy court battle. Approved by the Bureau of Alcohol, Tobacco, Firearms, and Explosives in 2010 under the Obama administration, the bump fire stock marketed by Slide Fire is pitched to increase firearms accessibility for those with limited mobility among other uses.

The company has often marketed the stocks as a wholly American piece of gun culture.