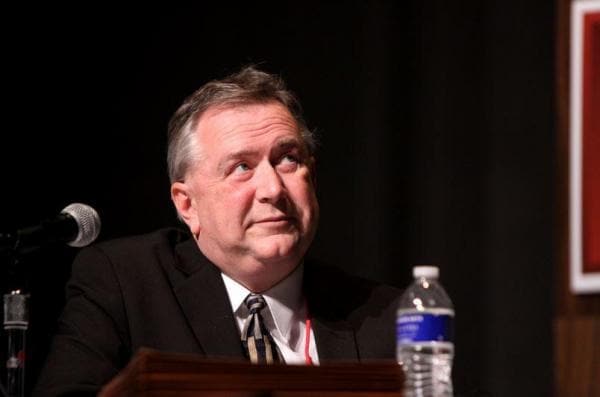 A former congressman from southern Texas could spend the rest of his life behind bars after a jury convicted him of 23 counts of fraud last week.

Federal law enforcement in Houston took former U.S. Rep. Stephen Stockman into custody Thursday for bilking two Republican donors out of more than $1.2 million for illegitimate charities, eventually funneling the money to pay his own expenses. Jurors convicted him on multiple counts of money laundering, mail and wire fraud, lying to the Federal Election Commission and filing a false tax return.

Stockman served two nonconsecutive terms in Congress, from 1995 until 1997 and again from 2013 to 2015, representing districts near Houston. An ardent supporter of the Second Amendment, Stockman dubbed himself “the most conservative congressman in Texas.” He made headlines when he raffled off a Bushmaster AR-15 during his reelection campaign in 2013 and again later that year when he tweeted an image of gun lubricant he dubbed “liberal tears,” which later became an actual product. He cut his political life short in a failed bid to unseat Republican Sen. John Cornyn the following year.

“When public officials use their office to defraud donors and violate federal law, we will hold them accountable,” said U.S. Attorney Ryan Patrick in a news release Thursday. “Corrupt officials like former congressman Stockman make it harder for the honest ones to do their jobs.”

In one instance, Stockman and his aides solicited $350,000 from the Ed Uihlein Family Foundation to renovate the “Freedom House” in Washington, D.C. — a place for young Republicans to fraternize — but instead funneled the money into personal bank accounts and his congressional campaigns. The following year, the same foundation spent $450,000 on a campaign mailer attacking Stockman’s opponent in the primary election. Federal law prohibits such direct donations over $25,000.

A separate donor, Stanford Rothschild Jr., unwittingly gave Stockman’s campaign $450,000 in 2010 and 2011 under the guise of funding voter education initiatives. Instead, the congressman spent $150,000 on personal expenses like dry-cleaning, plane tickets, medical care and trips to Disneyland. The 91-year-old Baltimore billionaire died last year with not a dime of his donation spent as promised.

“You are going to learn that Stockman is a bright guy, in some sense a political visionary,” said Sean Buckley, Stockman’s attorney, during opening arguments at trial last month, according to Courthouse News Service. “But he is also absent-minded and disorganized . . . He lives in a small, modest home, drives a van, eats at Taco Bell and McDonald’s, probably more than he should. This is not a case about fur coats and Rolexes.”

Jurors disagreed, finding Stockman guilty of nearly two dozen charges Thursday. He faces a maximum sentence of 20 years for each of the seven mail and wire fraud charges, 10 years for each of the 11 counts of money laundering and up to three years for filing a false tax return. Sentencing is scheduled for Aug. 17. Stockman’s attorneys told Courthouse News they will appeal.

“This is not a situation where he’s accused of any violence or hurting anyone so there’s no reason why they would put him in a restrictive environment,” Buckley said. “It’s not a country club. A lot of people have that misconception about federal prison. It’s not that at all. But he will not be in an environment where he will be physically threatened.”