Eric Holder may run for president in 2020 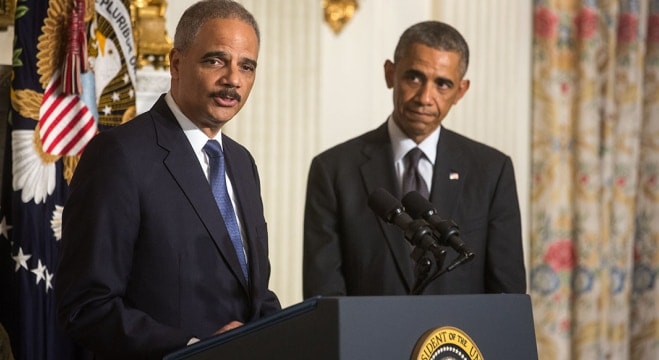 President Obama’s controversial attorney general is reportedly inching closer to a bid for the White House.

“If I were gonna do it, I would do it because I think — I would have concluded — that I could maybe unify the country,” Holder said.

The country’s former top cop talked to the Times just after Rev. Al Sharpton reportedly started a chant at the National Action Network Convention urging him to run for the office while Holder addressed those in attendance. Beyond this, he is scheduled to speak at the annual New Hampshire Politics and Eggs breakfast in June, an event often seen as a precursor to announcing a formal White House run.

As the nation’s 82nd attorney general, Holder had a long history of controversial stands on smart gun technology, states’ rights, contempt of Congress citations in the Fast and Furious gun-walking scandal, and other issues.

Since leaving government office in 2015, he has returned to private practice with the same law firm he worked at before joining President Obama’s cabinet. Holder’s firm is also lending its legal expertise to the Firearms Accountability Counsel Taskforce, a group of high-powered firms with plans to commit tens of millions of dollars in pro bono legal services for gun control efforts.

An avid champion in 2016 for the Democratic presidential candidate, former U.S. Secretary of State Hillary Clinton — who won California by an almost 2-1 margin at the polls — Holder’s firm went on to pick up $100,000 on retainer to the California Legislature as a legal shield against the Trump administration. He is currently spearheading efforts by the National Democratic Redistricting Committee to end the “gerrymandering of congressional and legislative districts locks in a Republican majority and locks out the voters.”