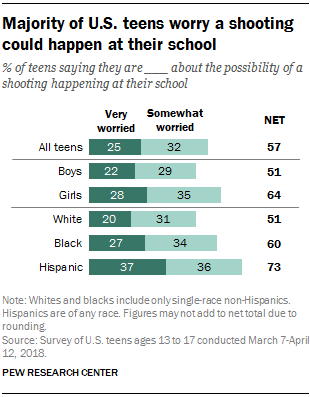 The poll finds 57 percent of students aged 13 to 17 worry somewhat or a lot about the possibility, while 63 percent of their parents share the same concern.

Nikki Graf, a research associate for Pew, said the survey, conducted in March and April, illuminated agreement among both groups as to how best to prevent future shootings — and arming teachers made the bottom of the list.

“When it comes to what can be done to prevent this kind of violence, far more teens view proposals focused on mental illness, assault-style weapon bans and the use of metal detectors in schools as potentially effective than say the same about allowing teachers and school officials to carry guns in schools,” she said.

Nearly nine out of 10 students agreed tougher mental health screenings, more aggressive treatment and keeping guns out of the hands of people diagnosed with mental disorders would be the most effective policies preventing more mass shootings. Some 79 percent agreed metal detectors may deter more crime, while 66 percent favored an “assault weapons ban” of some kind. Only 39 percent indicated arming teachers may thwart future attacks. 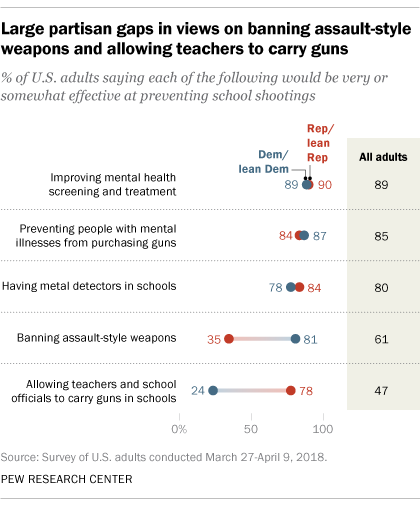 “Black teens are far less likely than white and Hispanic teens to say allowing teachers to carry guns in schools would be at least somewhat effective,” Graf said. “Twenty-three percent of black teens say this, compared with 44 percent of white teens and 39 percent of Hispanic teens.”

The survey indicates race matters when it comes to banning “assault-style weapons,” too, with 80 percent of black teens and 79 percent of Hispanic teens viewing the policy as at least somewhat effective — compared to just 59 percent of white teens who agreed.