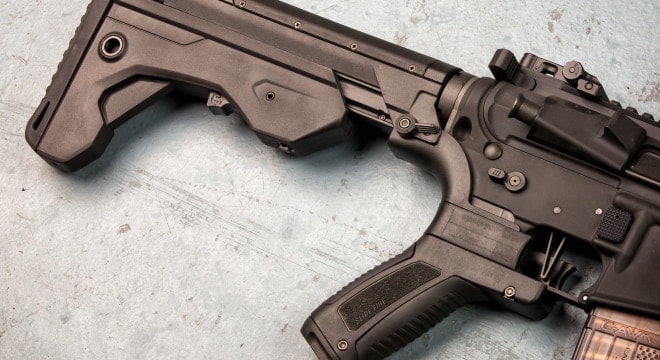 While the country’s primary manufacturer of bump fire stocks may have signaled they are leaving the industry, the question of the stocks themselves remains.

On Tuesday, Texas-based Slide Fire Solutions said they would stop accepting orders for their signature product next month and move to close their website afterward. The news was met with gratification from a national gun control group who is backing a class action lawsuit over the use of bump stocks in the Route 91 Harvest shooting last October.

“Bump stocks should not be available for sale to the general public, and they should never have been allowed to be sold,” said Avery Gardiner, with the Brady Center, who characterized the development from Slide Fire as a “positive development.”

Though recently banned in Florida, Massachusetts, New Jersey and Washington, and a federal regulation concerning the devices is looming, it is believed hundreds of thousands of the devices are in private hands.

According to research by the Bureau of Alcohol, Tobacco, Firearms, and Explosives, the agency freely states they do not know how many bump fire stocks are in circulation, but estimates developed from public comments to a proposed federal rule on the devices hinted at numbers between 280,000 to 520,000 with the manufacture and sale of the stocks being a $15 million annual industry since at least 2013.

The ATF thinks as many as 520,000 bump stocks are in circulation (Graphic: ATF)

The agency holds the median price paid per stock is about $200 in recent years, which would translate to as much as $104 million worth of stocks in the wild. Meanwhile, only one state that has outlawed the stocks, Washington, has moved to establish a “buyback” program, with a fixed rate of $150 per device, but that is pending funding allocations by lawmakers. At least one lawsuit, filed against Florida’s ban, is based on Fifth Amendment grounds, citing that private property shall not be taken for a public use without just compensation.

Slide Fire’s founder and CEO, Jeremiah Cottle, holds nearly a dozen firearm-related patents including several tied to bump fire stocks and hasn’t elaborated on his plans for the future.

“I built something, and a madman is taking it all away,” Cottle, an Air Force veteran, told Bloomberg Businessweek in the aftermath of the Las Vegas shooting that brought negative attention to the niche accessory and the company he founded in 2000.

“I’m sure in the lawsuit, we’ll learn more about their announcement about closing their website and what they plan to do with their assets, including their patent,” Garner said.

No matter what becomes of Slide Fire and Cottle’s patents, bump fire is one very big genie that is unlikely to get back into the bottle. The technology is readily available to create 3D printed bump fire stocks, with one man documenting such an achievement last April while CAD files are readily available without having to plumb the depths of the Dark Web. It should be pointed out that the practice of bump fire can also be performed without a special device and is even highlighted by actor Benicio Del Toro with a handgun in an upcoming big-budget action movie.

One national Second Amendment organization bemoaned the loss of the small business dedicated to the device that, prior to Las Vegas, was seen largely as an inoffensive novelty and had been approved by the ATF in 2010.

“It’s sad, but not surprising, that Slide Fire is closing its doors,” said Erich Pratt, executive director of Gun Owners of America. “What should surprise gun owners is that it was a Republican administration that put a gun parts maker out of business — especially since the Obama administration had refused to take such a course of action on several occasions.”

Besides the prospect of current bump fire stock owners becoming felons at the stroke of a pen, Pratt said the larger pool of gun owners should be worried about the future of semi-auto firearms in general.

“After all, given that the proposed ATF regulations erroneously deem the bump stock firing of an AR-15 to be ‘automatic’ fire, the AR-15 thus becomes a full automatic under those circumstances,” he said.

Slide Fire is set to stop accepting orders after May 20.