This is a record-setting $1.84 million Colt revolver (VIDEO)

As previously reported by Guns.com, the big .44 Colt earned its moniker due to its first owner, Capt. Niels Hanson who bought the gun in New York while in port and brought it back to Europe with him where it was passed down through his family and collectors in Denmark for over a century.

Well documented over the years, the revolver was billed by Rock Island Auction Company as the only known original cased Colt civilian Walker percussion revolver in circulation. When the gavel dropped on the rare hog leg, it hit the $1.84 million mark. 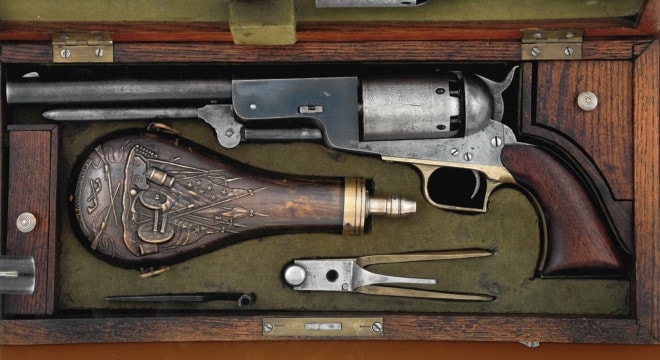 “This is a major milestone in the collecting community,” said RIAC President Kevin Hogan. “Not only is this a world record for a single firearm at auction, but further demonstration that the art and history in firearms is really catching fire.”

The auction generated $17.7 million in winning bids overall and besides the ‘Captain, saw a number of other rare pieces set records including a Winchester 1876 carbine that brought $747,500 and a Singer M1911A1 pistol from the Allan Cors Collection that hit $172,500.