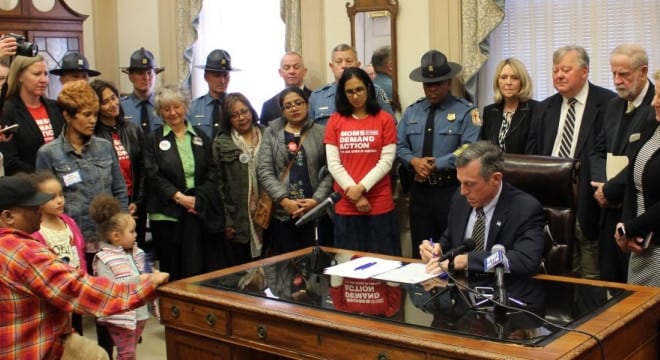 Democrat Gov. John Carney has backed a list of gun control bills this session but thus far has only been able to sign one into law.

Carney approved HB 174, aimed at deterring “straw purchases” by those unable to legally buy firearms, in a public ceremony on Wednesday surrounded by gun control advocates. The measure, which passed the legislature unanimously, is an administrative move that ups the felony punishment level for those convicted in the state of obtaining a gun for someone not legally allowed to possess one. Carney billed it as a win in the battle on gun crime in Delaware that will discourage middlemen willing to make unlawful gun deals.

“This legislation takes necessary steps to toughen the penalties for purchasing a gun illegally,” Carney said. “This passed with support from both parties, emphasizing our state’s commitment to confronting the issue of gun violence.”

The new law, which took effect at signing, bumps up the penalty under Delaware statute for straw purchasing from a Class F felony, which carries up to three years in prison, to a Class E Felony, which can bring up to five years.

The increase still pales to federal law, which allows for as much as a decade in prison if convicted. During HB 174’s legislative process, federal prosecutors secured a conviction against a Dover man who made false statements to a gun store during the purchase of a 9mm handgun. The new Delaware standard also falls short of neighboring Pennsylvania, who in 2014 adopted a straw buyer law with a five-year mandatory minimum sentence dubbed the Brad Fox Law.

Nonetheless, gun control organizations on hand for the signing in Carney’s office say every new law helps. “Every step we take to prevent gun violence in Delaware is a step in the right direction,” said Dennis Greenhouse, chair of the Delaware Coalition Against Gun Violence. “Every step is meaningful.”

At least three other bills supported by Carney — banning bump stocks, raising the minimum age to buy firearms to 21, and an “assault weapon” ban — are reportedly failing to gain steam in the legislature while pro-gun advocates are turning up the heat at public events with state politicians.