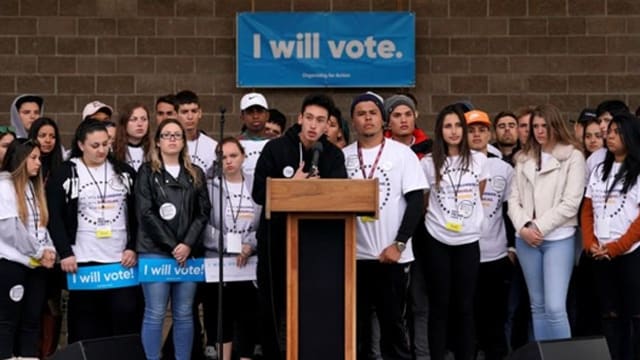 Teenagers in the Denver suburb of Littleton organized a rally Thursday to amp up youth voter registration ahead of November’s midterm congressional elections.

The “Vote for Our Lives” event cites inspiration from the March for Our Lives demonstrations held across the country last month. Both groups want stricter regulations on gun sales in the wake of a school shooting in Parkland, Florida that claimed 17 lives.

“It’s about knowing what you’re voting for, who you’re voting out and who you’re voting in,” said event organizer Madison Rose during an interview with Westword. “We don’t want to tell people what to think, but supply the information so hopefully they’ll form their own opinion.”

The event featured speeches from survivors and family members of recent school shootings, including 20 students from Marjory Stoneman Douglas High School in Parkland, as well as survivor of the Aurora movie theater shooting and a teacher from Columbine.

“The subject we’re passionate about is getting the conversation started of not necessarily gun control, but how can we make our schools safer for students,” Madison told Westword. “And any way we can do that while still finding common ground with people who may not align with our same views is what we’re trying to achieve. Education is a big part of this.”

The rally took place just hours before the 19th anniversary of the Columbine — arguably one of the most notorious school shootings in modern U.S. history. Students from more than 2,600 schools nationwide are expected to walk out of class at 10 a.m. Friday in protest of the nation’s gun laws, Reuters reported.

Coni Sanders lost her father, a teacher at Columbine High School, when two students opened fire on April 20, 1999, killing 12 before turning the gun on themselves.

“Since his death, I’ve worked tirelessly to strengthen gun laws in Colorado and around the country,” Sanders said in a statement published Thursday by Everytown for Gun Safety. “While states like Colorado have stepped up to the plate to pass common-sense gun safety measures, our leaders at the national level still are refusing to take any real action. It is unacceptable.”

Dudley Brown, president of the Colorado-based National Association for Gun Rights, told Reuters taking away gun rights does “precisely opposite of what the civil rights activists did in the 1960s.”

“The main objective of these students is to ban firearms completely, and confiscate the firearms of law-abiding Americans,” Brown said. “We will oppose them at every step.”