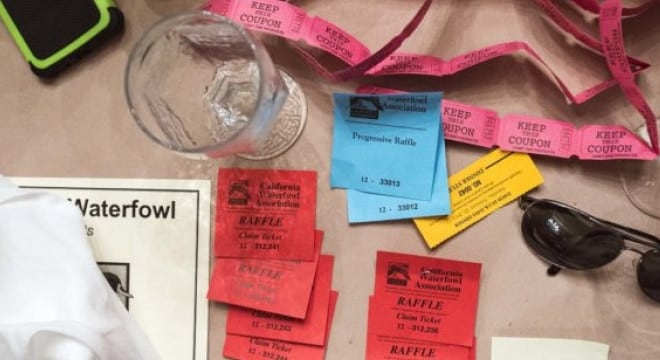 The California Waterfowl Association, who hold 100 such gun raffles at their local events annually across the state, garners as much as 80 percent of their fundraising proceeds through the practice. (Photo: CWA)

An Assembly bill sparked over a firefighter association’s raffle of an AR-15 has resulted in mobilizing a diverse field of opponents.

Assemblyman Chris Holden, D-Pasadena, earlier this year gutted and amended AB 3199, originally a CalWorks measure, to curb the use of raffle events with firearms as prizes. In its current form, the measure would restrict the practice to non-profits and limit them to just three firearms per year.

“I’m not quite sure why someone would want to raffle off an AR-15, but this would at least create a reasonable set of standards of how that would be done, and (ensure) it’s in compliance with the law,” Holden told the Sacramento Bee.

Holden originally structured his proposal to ban gun raffles outright, then modified it to a three-per-year cap. The need for the legislation, Holden said, came from a controversial charity event to benefit Explorer and Residents programs for Cal Fire. With the firefighters association raffling an AR-15 in the days immediately after the high-profile school shooting in Parkland, Florida, some in the community were outraged.

However, many non-profits say the move by Holden, if adopted, will hobble their operations. The Rocky Mountain Elk Foundation said they stand to lose up to $500,000. The California Waterfowl Association, who hold 100 such raffles at their local fundraisers each year across the state that bring in about $2 million per year, garners as much as 80 percent of their proceeds through the practice.

“Eliminating gun raffles at most of our events would gut a major source of our revenue for conservation,” said the group, who point out that all winners “are required to go through the same background check and 10-day waiting period as every other gun buyer in California.”

Small organizations, such as the Liberal Gun Club, say limiting their raffle efforts will curb their ability to operate and fund special events and legal work while having little impact on public safety.

“There is simply no evidence that these firearms are used in crimes or contribute in any way to our violent crime rate,” said the group in a statement. “It’s simply that the sponsor of this bill doesn’t like guns or any of the organizations that are associated with them in any way.”

The Orange County Register, in a series of editorials attacking Holden’s proposal, have termed the legislation “pointless” and have publicly encouraged the lawmaker to “pull the bill and focus on solutions to gun violence that might actually benefit the public.”

AB 3199 is currently in the Assembly’s Committee on Rules.