Experts weigh in on the value of school resource officers 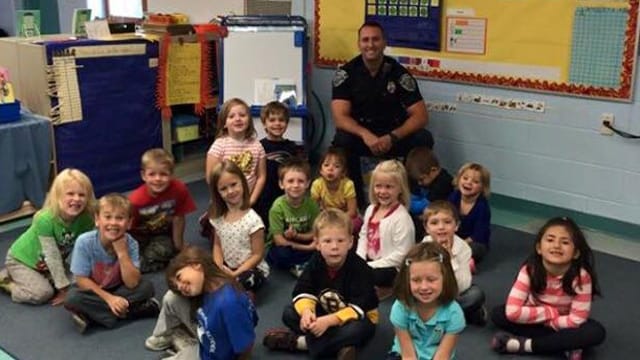 The value of school resource officers has come into question again after the Parkland massacre. (Photo: National Association of School Resource Officers/Facebook)

The answer appeared painfully obvious that day when School Resource Officer Scot Peterson idled outside Marjory Stoneman Douglas High School for four minutes while a gunman hunted down students and teachers inside. Seventeen would die before officers from the Coral Springs Police Department intervened.

A month later, however, an SRO at Great Mills High School in southern Maryland would make headlines when he exchanged gunfire with a 17-year-old school shooter. St. Mary’s County Deputy Blaine Gaskill earned the praise of state and local officials impressed with his quick response to the March 20 attack that killed one student and wounded another.

The two cases illustrate the extremes of school-based policing. The experiences left in between, critics argue, put youth — particularly minority students — on an unnecessary collision course with the criminal justice system, allowing cops to impose discipline in place of school administrators.

“Students are needlessly arrested for offenses as minor as disorderly conduct, which can include swearing at a teacher or throwing spitballs,” said Amanda Petteruti, associate director at the Justice Policy Institute and author of a 2011 report on school-based policing. “SROs lead to discipline applied without the filter of school administrators or policies. This in turn leads to a troubling disruption of the educational process through suspension and expulsion, the result of which is some students who never become re-connected to school.”

Petteruti’s research indicates crime levels in school have reached a 20-year low. A study sample of schools, according to JPI, found those with SROs reported five times as many arrests for disorderly conduct as schools without officers. Advocates argue such offenses should be dealt with “inside school” and not in the court system, leaving at-risk students more vulnerable to dropping out entirely.

“When we choose SROs and police over guidance counselors and teachers, we send a powerful message to students that we are not invested in their success,” said Jim Freedman, a senior attorney at Advancement Project back in 2011 when the report was first released. “And when we handle discipline in the police station instead of inside schools, too often we send our children onto a downward spiral and burden them with a lifetime of barriers to employment, education, and housing.”

The National Association of School Resource Officers, however, calls Petteruti’s research misleading and biased. “I’m not even going to refer to it as data. I won’t even go that far,” said Mo Canady, NASRO executive director, during an interview with Guns.com last week. “Their information comes from schools in specifically targeted areas. Areas that I’m not sure the SRO program was implemented in the way that it was intended to be.”

Canady said the organization, appalled at the JPI report and others like it, spent nine months compiling their own research into the efficacy of school-based policing. Their report, released in 2012, found juvenile arrests in the United States dropped 50 percent between 1994 and 2009 — the same period SROs experienced “explosive growth” in schools nationwide, Canady said.

“Their agenda doesn’t quite fit,” he said. “You learn that when you are in a high school with 1,000 students, they are going to behave like teenagers. That’s who they are. So the least productive thing we can do … is going around trying to arrest kids all day long. That wasn’t what we were there for.”

NASRO estimates SROs number somewhere between 14,000 and 20,000, spread across 30 percent of schools nationwide. Canady said the proportion of officers who receive training through their organization are purposefully selected for their role, with significant consideration given to a candidate’s desire to work with children and track record of youth volunteer service.

“I’ve spent a lot of times with our members … rarely does one of those officers need more than five fingers on one had to count how many students he’s arrested in a school year,” he said.

But it’s not just whether SROs arrest too much. Other critics argue state and federal dollars should spend more money on mental health counselors, not cops.

Canady’s response is simple. “Why one over the other? We love school counselors and every school in America needs more counselors,” he said. “We definitely we need to figure out a way to fund more of those types of professionals. A really good SRO, that’s one of the first relationships they build.”