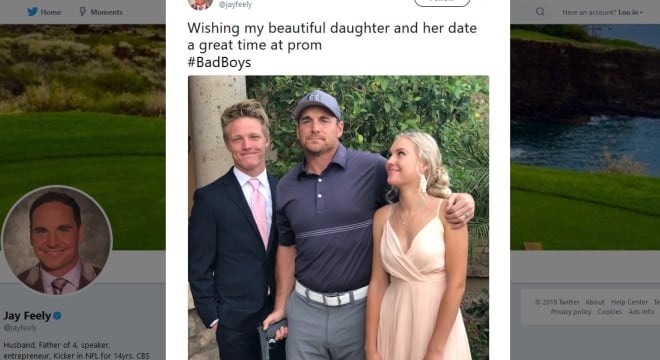 Shannon Watts wasn’t feeling the laugh factor in the above tweet from Jay Feely over the weekend. (Photo: Twitter)

Jay Feely, a veteran kicker with a 15-year career, was playing defense after gun control advocates called him out for a photo posted on social media practicing a familiar trope.

On Saturday, Feely posted an image of himself, alongside two smiling teens in formal attire. Almost missed in the photo was a 1911 Commander-style handgun pointed down the NFL star’s leg. The single-action pistol was not cocked and Feely’s finger was not in the trigger well.

“Wishing my beautiful daughter and her date a great time at prom #BadBoys,” said the retired kicker who played with a wide array of teams including the Giants, Dolphins, Chiefs, Jets, and Bears.

This sparked a series of tweets in reply, including a running commentary from Moms Demand Action founder Shannon Watts.

“Oh yay – American dads have kicked off the season of ‘let’s pretend I’m going to shoot my daughter’s date for for impugning her chastity’ pics,” said Watts who followed up with, “I actually just think he’s an irresponsible gun owner with a questionable sense of humor… Maybe this would have been more hysterical if teenagers weren’t being shot to death on a regular basis all over our nation. ¯\_(ツ)_/¯” when urged to cut Feely a break.

Feely, who serves as a CBS Sports football analyst and has been an outspoken critic of President Obama in the past while appearing on Fox News, left the image up and later defended it.

“The prom picture I posted was obviously intended to be a joke. My Daughter has dated her boyfriend for over a year and they knew I was joking,” he clarified Sunday morning. “I take gun safety seriously (the gun was not loaded and had no clip in) and I did not intend to be insensitive to that important issue.”

To which Watts moved to get in the last word, saying, “Guns are not toys or props. Especially in a nation suffering from a gun homicide, suicide and negligent shooting crisis,” but gave Feely “Kudos for apologizing.”