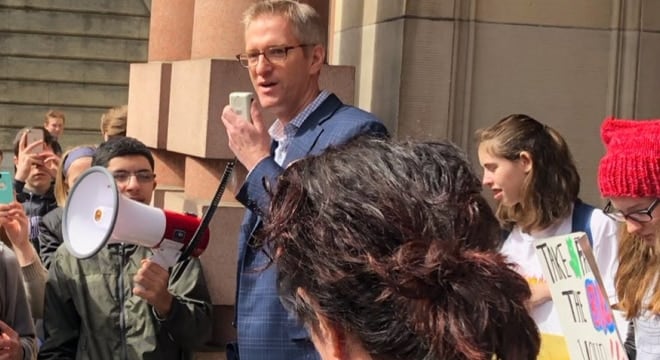 Mayor Ted Wheeler, a Democrat, promised a group seeking gun control that he would work to both institute local regulations and overturn a state ban on such laws.

Speaking to a group of student activists gathered outside of Portland City Hall on Friday as part of a national walk-out campaign on the anniversary of the Columbine school shooting, Wheeler said the youth had made a difference and he stood with them. “I support a ban on ‘assault-style’ weapons,” he said to cheers from the crowd, as well as bumping the age to buy all guns to 21. Both measures the Mayor previously floated in a public letter addressed to the “Students of Portland” last month.

Though Wheeler may want city leaders to act tough on guns, state firearm preemption laws forbid local governments from regulating the “sale, acquisition, transfer, ownership, possession, storage, transportation or use” of guns in any way. But the former Oregon State Treasurer and political ally of Gov. Kate Brown said he is going to work on that as well.

“I am going to Salem during this next legislative session and I’m going to ask the Governor and the legislature to lift the preemption in Oregon,” Wheeler said.

Currently, the Oregon Legislative Assembly is all-blue, with Democrats holding large majorities in both the state House and Senate. Brown, who has received support from former New York Mayor and gun control advocate Micheal Bloomberg in the past has urged lawmakers to pass a number of anti-gun bills since taking office.