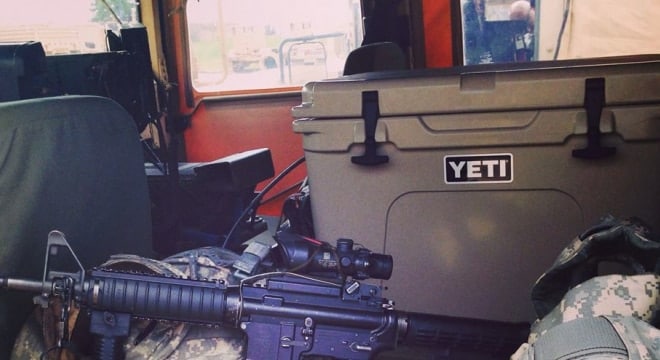 Yeti has reportedly declined to be an NRA vendor moving forward, a decision that rubbed some of the company’s fans the wrong way (Photo: Yeti)

According to the National Rifle Association, Yeti, the popular Austin-based maker of coolers, drinkware and ice chests, quietly declined to do business with the organization– a move that quickly drew scorn from outdoorsmen.

Past NRA president and current head of the Unified Sportsmen of Florida, Marion Hammer, sent an alert Friday saying Yeti no longer wished to be a vendor or sell products to The NRA Foundation, a non-profit set up by the Second Amendment member organization to promote youth firearms training. Hammer said the move, coming from one of the most recognized names among outdoor companies without explanation, was unsportsmanlike.

In response to the news, Twitter tags #NoYeti and #BoycottYeti became swamped with posts from gun enthusiasts as the company’s most recent post on Facebook drew over 3,800 comments, the majority slamming the cooler maker.

“As a lifetime NRA member the Yeti products I have will be trashed and I can assure you I will no longer support via purchasing/owning any Yeti products,” said Jeff Tucker in a comment that was liked over 2,100 times. “You have turned your back a large percentage of those who supported your brand and helped build it.”

Outdoor co-op REI has in the past weathered calls to consider dropping their vast catalog of Yeti products over their support of the NRA, and recently distanced themselves from Vista Outdoors, the parent of Smith & Wesson, but there is no indication that the move by Yeti was done to keep REI happy.

Among those celebrating the news from Yeti was Moms Demand Action founder Shannon Watts.

Please be sure to thank @YETICoolers. And go here to make a purchase: https://t.co/zQBacmVVI6

Any company opposed to the @NRA leadership’s deadly agenda deserves our business. https://t.co/c4UuXmnSrf

Meanwhile, when speaking of Yeti’s competitors, Orca sells a line of officially licensed NRA-branded coolers while RTIC over the weekend posted the text of the Second Amendment to the Constitution across their social media. Pelican Coolers, in direct responce to Yeti-gate, announced they would make a $10 donation to the NRA for each box sold in April.

Yeti disputes the NRA’s version of the break in the following statement, emailed Monday afternoon to Guns.com:

Further, the NRA-ILA stated in that same public communication that “[YETI has] declined to continue helping America’s young people enjoy outdoor recreational activities.” Nothing is further from the truth. YETI was founded more than 10 years ago with a passion for the outdoors, and over the course of our history we have actively and enthusiastically supported hunters, anglers and the broader outdoor community. We have been devoted to and will continue to directly support causes tied to our passion for the outdoors, including by working with many organizations that promote conservation and management of wildlife resources and habitat restoration. From our website to our film footage and from our social media posts to our ambassadors, YETI has always prominently featured hunters pursuing their passions. Moreover, YETI is unwavering in our belief in and commitment to the Constitution of the United States and its Second Amendment.”