An evolutionary branch of the Heckler & Koch G36 program, the XM8 at one point about 15 years ago was a big contender for the U.S. Army’s new rifle.

To take a look at what could have been, Ian McCollum with Forgotten Weapons sits down in the above chat with Larry Vickers to go over a XM8 construct made by Tom Bostic with Gaithersburg, Maryland’s Tommy Built Tactical. Vickers was able to get the piece crafted by Bostic using some original XM8 parts– stock, trigger housing, front sight gas block, et.al– along with “chunks” of G36 receivers to make a post-86 gun.

The XM8 project was part of the Army’s Objective Individual Combat Weapon program to replace legacy platforms such as the M16 and M203 and a few prototypes were delivered for the service to test out in 2003. However, while the G36 is running loose in the wild, the Army never did adopt the XM8 although they proved reliable in initial testing. 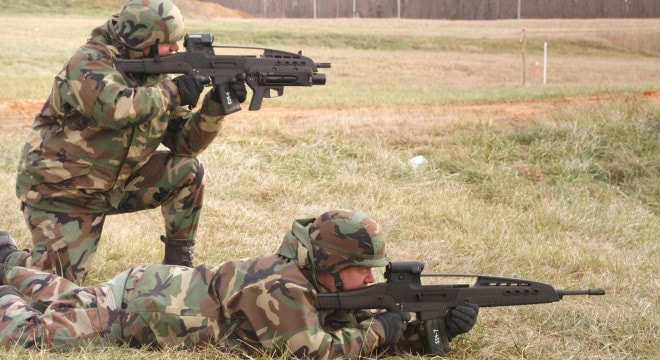 The Army ordered 200 XM8s for testing, but never adopted them. (Photo: U.S. Army)

“For instance, they took 10 weapons and fired 10,000 out of each weapon without cleaning them. Of the ten weapons tested there was only one mechanical failure,” noted Picatinny Arsenal in 2004, mistakenly forecasting adoption of the gun by the service by 2006.

If you want to see one in action, Mac has another Tommy Built XM8 on the range below.