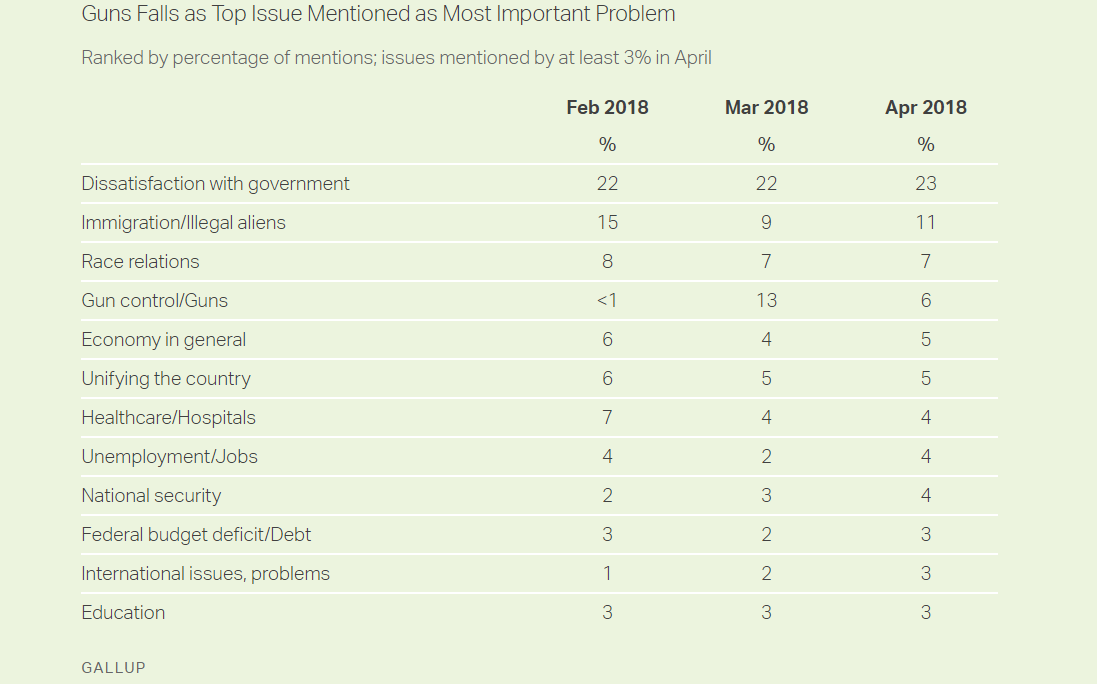 A recent Gallup poll revealed the percentage of Americans ranking gun control as the nation’s top problem decreased by half this month.

The survey, conducted April 2-11, found only 6 percent of respondents said strengthening regulations on gun sales remains the country’s “most important problem” — down from 13 percent in March.

Dissatisfaction with the government, immigration and race relations rounded out the top three most mentioned issues by survey respondents, at 23 percent, 11 percent and 7 percent, respectively.

Andrew Dugan, a Gallup researcher, blamed the temporary spike on a phenomenon often witnessed after high-profile mass shootings, noting the issue spiked 4 percent after massacres at Sandy Hook Elementary School in 2012 and the Pulse nightclub in 2016.

Larry Keane, senior vice president of government and public affairs and general counsel for the National Shooting Sports Foundation, isn’t surprised by the results. “Perhaps Americans aren’t convinced by the irrational vilification of guns or by calls to ban guns with certain cosmetic features,” he said in a blog post Saturday. “Or maybe enough Americans see the successful passage of bipartisan federal legislation to address the very real gaps in the FBI’s background check system as an effective tool to fix the real problems, rather than attack the Second Amendment.”

The Fix NICS Act — passed as a rider to the federal budget deal struck last month keep the government operational through September –penalizes federal agencies that don’t update the criminal databases feeding the gun background check system in a timely fashion. It also incentivizes state authorities to do the same.

NSSF recently awarded Texas Republican Sen. John Cornyn “Legislator of the Year” for his efforts to pass background check reform after a gunman murdered 26 people at a church in Sutherland Springs — just 35 miles southeast of San Antonio — back in November.

State and federal investigators said the shooter should’ve never owned the semi-automatic rifle used in the attack. Discharged from the military in 2014 after serving time in confinement for assaulting his wife and stepson two years earlier, Air Force officials never forwarded the his criminal records to the Pentagon.

“While these types of effective laws are put into place and while gun crimes continue to be prosecuted under the Trump administration, the media will continue to play their old scripts about guns and support for restricting the rights of law-abiding Americans,” Keane said. “As the survey shows however, this message is far from the reality for most Americans.”