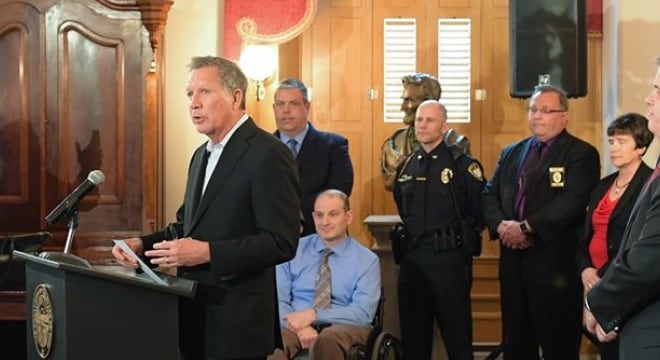 Kasich says there are instances in which “data is not being reported” to NICS in a timely way, leading to guns in the hands of those who shouldn’t have them. (Photo: Kasich’s office)

The move, announced in a press conference held in conjunction with state law enforcement representatives, aims to up compliance with the FBI’s National Criminal Background Check System, the database used to clear gun transfers and firearm permits. The need for the order came after the conclusion of a review in 2015 that identified gaps in NICS when it came to the data reported by local courts and agencies in Ohio to the federal government.

“You got a case here in Ohio where this data is not being reported,” said Kasich, pointing to an instance where Hamilton County, encompassing Cincinnati, did not report its information to the FBI for four months. “So you have people who are felons, with the data not being put into the NICS system — people who have no business having guns — have these guns.”

Outside of Ohio, the one-time Republican presidential candidate pointed to mass murderers in Charleston, South Carolina and Sutherland Springs, Texas that may not have legally been able to purchase guns due to poor records in the NICS dataset.

The executive order, which was characterized by Kasich’s office as “simple” restablishes a working group composed of members from the Office of Criminal Justice Service of the Ohio Department of Public Safety, the Ohio Attorney General’s Bureau of Criminal Investigation, and the Ohio Supreme Court to revisit their 2015 review and identify problem areas that may still remain. The group would create a compliance reporting manual for local courts and agencies to use and the process would, in turn, be reviewed by the Ohio Auditor of State.

Gun control advocates welcomed the news from Kasich. “Improving Ohio’s records reporting can save lives, and we’re grateful to the governor for taking action on this critical issue,” said Maureen Washock, of Moms Demand Action. “The background checks system is only as strong as the information it contains, and we support all efforts to prevent records from falling through the cracks.”

In addition to his executive order, the Kasich is backing a package of bills aimed at bringing so-called “red flag” legislation to establish an Extreme Risk Protection Order process to allow police to obtain the firearms of those thought to be at risk, as well as up gun surrender mandates in some domestic abuse cases.