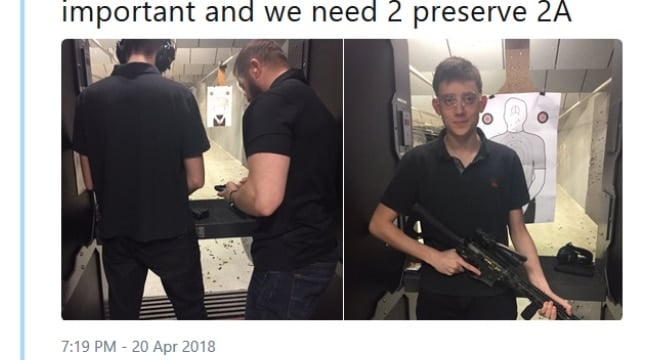 A series of tweets from the shooting range landed a pro-Second Amendment student in the security office when he returned to school (Photo: Kyle Kashuv/Twitter)

Marjory Stoneman Douglas High School student Kyle Kashuv went to the range for the first time on Friday and said he was questioned by officials about it on Monday.

Kashuv, who has been waging virtually a one-student pro-Second Amendment campaign largely at odds with the gun control effort advocated by his more publicized classmates, visited an area shooting range with his father last week. Touching a gun for what he described as the “first time ever,” Kashuv posted images of himself with an AR-15 in front of a silhouette target to social media. Other tweets included video of the youth firing the rifle and receiving instructions on the use of the gun while wearing safety equipment.

“It was great learning about our inalienable right of #2A and how to properly use a gun,” said Kashuv, who went on to say visiting the range made him appreciate the Constitution. “My instructor was very informative; I learned a lot. #2A is important and we need 2 preserve 2A.”

Fast forward to the next school day and Kashuv said he was pulled him out of class and questioned “intensely” by two school resource officers and a Broward County Deputy over the tweets and the visit.

“They kept calling me ‘the pro-Second Amendment kid.’ I was shocked and honestly, scared. It definitely felt like they were attempting to intimidate me,” Kashuv said in a statement sent to the Daily Wire. “I was treated like a criminal for no reason other than having gone to the gun range and posted on social media about it.”

Speaking to Fox News on the encounter, Kashuv said one of the officers told him, “Kyle, you have such good grades, why would you do this?”

In the end, the student was released with school officials saying they would talk to his parents about the meeting.

The youth, whose social media page includes images of his meetings with President Trump and Vice President Pence in the aftermath of the Parkland school shooting that claimed the lives of 17 students and faculty, is unapologetic.

“I will never apologize for exercising my inalienable constitutional rights and neither should you,” he tweeted late Monday.

I will never apologize for exercising my inalienable constitutional rights and neither should you.